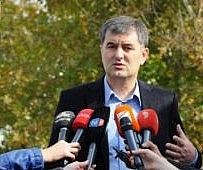 Sozar Subari says that background of serving in the Security is an advantage rather that disadvantage. (IPN)

Comments of outgoing Defense Minister, who criticized appointment of Security Service official to her vacant seat, triggered an angry response from the Prime Minister and a member of government.

“(Their) comments were very inappropriate, unfortunately. I am sure that after Batoni Davit and Kalbatoni Tina overcome emotions, they will make different comments,” said to PM Giorgi Kvirikashvili on Tuesday.

At the same time, Sozar Subari, Minister of IDPs and Refugees, says that for him Tina Khidasheli’s comment, when she said that the second time Security Service people were taking over Ministry of Defense, was quite strange as Irakli Alasania was also a former Security cadre.

“I do not understand an example, when Tina made a distinction between Alasania and Izoria. We all remember very well that one time Alasania was a Deputy Security Minister and, if I’m not mistaken, had pretty high rank of colonel or general… However, I believe that it is an advantage rather than disadvantage,” Sozar Subari said.

On Monday Tina Khidasheli state that observes an unhealthy trend when the second time after Georgian Dream took over the power State Security Service takes over the Ministry of Defense.

“I think that Prime Minister makes a mistake,” Khidasheli said to journalists on Monday. “It is not a good message to everyone – to our partners (abroad), as well as inside the country. At first Alasania, a civilian, open minister, then Khidasheli was replaced by Security (Service). This is an unhealthy trend.”

Davit Usupashvili, Speaker of Parliament, sharply criticized the government and ruling Georgian Dream party in his evening interview with the First Channel. Usupashvili is Tina Khidasheli’s spouse and both represent Republican Party, which split with Georgian Dream in March, yet retained a mode of ‘strategic partnership’.