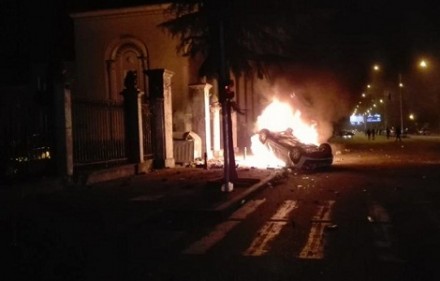 TBILISI, DFWatch–“A common incident has been utilized by destructive political forces to escalate the situation,” Prime Minister Giorgi Kvirikashvili stated at an emergency briefing at about 5 am on Sunday appealing the crowd in Batumi to calm down.

“Unfortunately, those forces don’t hesitate to shake very foundations of stability, and deliberately provoke vandalism and resort to violence against representatives of the state bodies,” the PM said.

At 5 am the situation in Batumi is still tense. There are several pockets of unrest in the city. The number of injured rose to 24. The crowd is burning police cars, demanding the resignation of Batumi’s chief of police and that a batumi native is appointed in his place. The incumbent chief is a native of Gori in eastern Georgia.