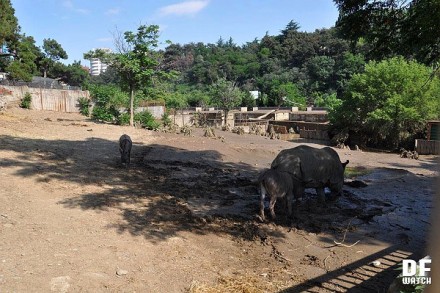 Survived animals of the zoo (DFWatch)

Tbilisi, DFWatch – Georgian authorities apologized for releasing the wrong information regarding escaped zoo animals, but they still blame the director of the Tbilisi zoo, Zurab Gurielidze.

“The report was based on the information provided by the zoo administration, which said the predators were no longer a threat to the public,” PM Irakli Garibashvili said, referring to a document prepared on June 16 by the Crisis Management Center, writes IPN.

“I feel very sorry for this, and I would like to apologize to the people for misinforming them, despite the fact that the source of this information was the director of the zoo. He had repeatedly told the emergency headquarters that the animals were not at large anymore,” Garibashvili said.

Nevertheless, the government still had had to check the information before informing the public: “Help the director in counting the animals, if he needs it. And don’t spread any information, no matter where it comes from, if you are not sure of its accuracy.”

Mindia Janelidze, the head of Security and Crisis Management Council, has apologized to public for his wrong statement about predators as well: “I want to apologize to society because of spreading false information, but trust me, we received the information from the zoo, and it was checked by all competent agencies. Only after this we made a public statement.”

On Tuesday, Janelidze declared that there is no more threat of predators on the loose in Tbilisi. But on Wednesday a man was killed by a white tiger in the old silk factory. After the incident, the Prosecutor General’s Office summoned Gurielidze, and he took the responsibility for the misinformation.

“I acknowledge that based on me as a source, government bodies reported this information and it was considered that there was no longer a threat. It is all my fault,” he said after the two-hour long meeting.

Later that evening a crowd rallied in front of the government building showing their support for Gurielidze.

Although he took the full responsibility for the wrong information,  some of the media noted that the zoo administration did say on Tuesday that there was a tiger, a bear and a hyena still missing.

On Wednesday, after tiger killed a man, Zoo director warned the public one more “small tiger” (one and a half years old cub) and a striped hyena might be on the loose. Nothing was stated about the bear which previously had been declared unaccounted.

After that several people contacted emergency call center 112 about spotting animals in various parts of Tbilisi. So far all of those alerts proved to be false.