Batsbi: A Silent Death of a Minority Language

Batsbi: A Silent Death of a Minority Language 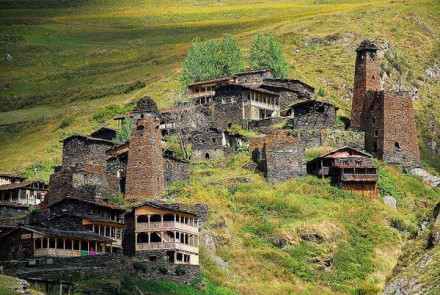 The Batsbi language, a minority language related to Chechen, has been driven to the brink of extinction. Traditionally spoken in Zemo Alvani, Akhmeta Region, Kakheti, it has already lost its role as a community language and without institutional support it continues to decline at a rapid pace.

Revaz Orbetishvili is the forefront fighter for the preservation of the Batsbi language and one of community leaders in Zemo Alvani. Many foreign linguists studying the language have chosen to stay at his place to receive instruction.

‘All of us here are Tsova Tush’, Revaz tells me at a funeral we’re attending, ‘yet we’re all speaking Georgian. Not a single word in our own language.’

The Tush were resettled to the plains from their historical homeland in Tusheti in the 19th century. Today they inhabit the villages of Kvemo Alvani and Zemo Alvani in the Akhmeta tegion of Kakheti. The majority of the Tush speaks a dialect of Georgian, while one subgrouping — the Tsova Tush — speak a separate language.

Their language, known as Batsbi or Bats, is spoken in approximately half of the village of Zemo Alvani. It is distantly related to Chechen and Ingush and is considered by linguists to have preserved many old forms absent from its sister languages. Although today it features multiple Georgian loanwords, a selection of guttural consonants and diphthongs absent in Georgian reminds us to look for its relatives across the Greater Caucasus mountain range.

Different linguistic studies put the number of speakers at approximately 3,000, yet Revaz estimates that active speakers may be as few as 800. There is also a generational gap. ‘Some youth in their late twenties speaks Batsbi, but teenagers can’t speak it at all. The language is headed towards a disaster.’

For centuries, Batsbi served the community as a spoken language, while Georgian was used for writing and higher domains such as religion. The situation of stable bilingualism began to change with Georgian slowly replacing Batsbi as the spoken language.

Revaz cites multiple reasons for the decline. One of the factors is the high degree of intermarriages between Tsova Tush men and women from different villages, making Georgian a natural choice for a language of communication between family members.

Although Revaz writes poetry in Batsbi, his main ambition is to preserve the language in its traditional domain — daily spoken communication. ‘I’d like to establish spoken Batsbi classes for children, without any salary. I approached the principal of the school in Zemo Alvani to ask for a classroom, but he told me that it required consent from the Ministry of Education.’

Batsbi seems to be one of the victims of the authorities’ fear of linguistic minorities demanding political privileges. Georgia still hasn’t ratified the European Charter for Regional or Minority Languages which grants rights to minority language users. What constitutes a minority language has proven controversial in the country; while the official policies are very progressive towards Armenian and Azerbaijani, other languages like Batsbi, Mingrelian, or Svan don’t have this luxury. Being traditionally of Georgian Orthodox faith and having historically used Georgian as their literary language, users of these languages are considered a part of the Georgian ethnos, hence not in need of being granted additional rights — such as minority language schooling.

The prospects for saving Bats from extinction are bleak, yet Revaz pledges he won’t cease his efforts to save his heritage. ‘Whatever government comes, I will stand firm in my struggle to save Batsbi. The children should know it and learn it.’