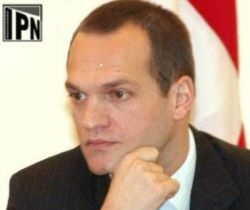 Tsiskarishvili is parliamentary leader of the majority National Movement party. He says that it was necessary to appoint Vano Merabishvili, who used to be leader of the most authoritarian law enforcement body, as prime minister, out of concern for the country’s security and economic development.

P.T: The country is facing challenges in the economic and social sphere. I mean providing employment, also strengthening in social direction, health care. Pensions increase. But it is not enough, on the background of increasing prices and inflation, because they spend all their pension on medicines. So along with increasing pensions these people should be provided with protection and insurance in regards to health, to save expenses and not to spend 90% of that small pension in medicines. This is really a challenge, and a really difficult issue to solve, in financial terms.

So, we are facing these challenges, and the challenge of attracting investments for the economy, on the background of a crisis, and while Russian tanks are stationed in our country. In regards to employment, certain steps were taken to develop tourism and construction of hydro electric power stations. But this cannot provide employment, so today these are the main challenges for us, just like for many European countries.

The second is security challenges. When 20 percent of our country is occupied, aggressive forces are located on our grounds, when we build democracy and consolidate democratic institutions, one of the main democratic values is fair elections, and in this period there are planned military exercises in North Caucasus, which naturally is a source of concern not only for us, but the whole world, which is observing it closely.

On this background, presenting Vano Merabishvili at this time is very good, positive and timely decision and this will help our country to overcome those challenges.

P.T: He worked for more than three years in a very difficult period in regards to economy. He overcame the world financial crisis so that the Georgian economy didn’t collapse and we had a stable 6-7 percent increase. Of course, shortcomings remain in our macro economic parameters and data, but all these are to be corrected. So, new blood, new energy and courage, which Vano Merabishvili will bring at renewed government, is very important to overcome the challenges I talked about.

– You say that the economy team needs the interior minister’s experience?

P.T: No, I didn’t want to say that at all. Vano Merabishvili will contribute a lot to the economy team in regards to economy. In recent years he has also been very interested in economic issues. He is also a very good manager and the government needs a good manager.

He is a political figure and the government also needs a strong political figure. He also has experience in security and law enforcement structures, and this is very good for the country’s security.

Our country faces very serious challenges in the fields of social issues and economy, also to strengthen national security. Thus, appointing Vano Merabishvili to this position is timely and a good decision, and he also has answers to these challenges, which will be presented in the government’s action plan.

– What is different in this program?

P.T: In the next few days you will see this program and we will have the chance to discuss it in details. Now it’s not possible to talk about details.

– Creating a new Employment Ministry shortly before the elections seems more to be part of the election campaign than a real step. Isn’t it usage of budget money in favor of one party?

P:T: Let’s say so. Overcoming unemployment won’t be the prerogative of this ministry only. This ministry will be the coordinating body, which will coordinate reforms in the field of employment, it will be handling construction issues, attracting investments, trade issues, transport, strengthening communications, etc. This will be a coordinating body, because providing employment and creating jobs is a subject to take care of and a priority of each member of government.

– The Christian Democrats several years ago had the idea to create an employment ministry as a separate body, but then the government called it not serious. Why has it become serious now?

P.T: This will be the post of Minister and not a separate ministry.

 Will anything change at the Interior Ministry?

P.T: Ask the new minister what will change and what will not.