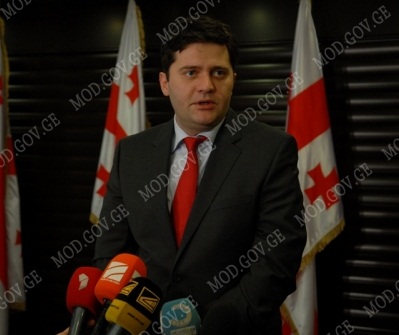 Former Defense Minister Bacho Akhalaia is the new interior minister. His brother Data Akhalaia resigned as head of the domestic intelligence service in connection with Bacho's change of position. (Ministry of Defense photo.)

He takes over for Vano Merabishvili, whom the president on Saturday appointed prime minister.

After Manjgaladze’s statement, Prime Minister Vano Merabishvili responded by saying that Bacho Akhalaia is the best choice for Interior Minister, and that he will be able to retain and continue the reforms and directions, which this body has taken during his time as minister. He said he cannot be indifferent towards the fate of the Interior Ministry.

“I’m happy that the president supported my initiative. We of course will continue together with him and other government members to conduct successful reforms in all bodies.’

The Interior Ministry today released a short statement, which says that Data Akhalaia, the head of the domestic intelligence service, the Constitutional Security Department, and brother of Bacho Akhalaia, has resigned in connection with his brother’s new job. The statement does not explain the exact reason for his resignation.

“The decision was made on the basis of Mr Bacho Akhalaia’s presentation on the position of the Minister of Internal Affairs of Georgia.”

Also the other power ministry, Defense, today got a new man at the top: Dimitry Shashkin, who has been education minister since 2009, and before that was prison minister for ten months. He will be the new defense minister.

Khatia Dekanoidze, former rector of Police Academy, will be the new education minister. She was recently appointed head of the National Examinations Center, to replace Maya Miminoshvili, whom the education minister fired from her position.

There are changes in refugee ministry too. Dali Khomeriki, who used to be education and culture minister at the exiled Autonomous Republic of Abkhazian Legitimate Government, will become new refugee minister, replacing Koba Subeliani.

Yesterday, Prime Minister Vano Merabishvili announced that he is establishing a new post of employment minister, which will be filled by Paata Trapaidze.

The president’s spokesperson says the list of ministers has been sent to parliament along with a seven-page government action plan called ‘More Profit to People.’

Parliament will approve the new plan tomorrow, but the new ministers will already today meet with parliamentary factions and committees and answer questions from parliamentarians.

Both the old and new ministers will attend the meetings. At the end of the day, a summing up session will be held.