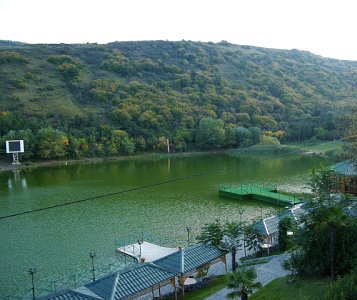 TBILISI, DFWatch–More than 1500 Georgians have signed a petition demanding a stop in the cutting of trees in a recreation zone in the hills above the capital.

The land plot was illegally sold by Tbilisi City Hall to a politician so he could build a restaurant to be used for banquets and concerts, although the area earlier was subject to a ban on any new construction work.

The zone is in the heart of a landscape for recreational use called Turtle Lake, where Tbilisi residents often come to relax, exercise and take a walk with their children.

Transparency International Georgia (TIG) claims it’s difficult to make it clear when this land plot was downgraded from a landscape-recreation zone, where any constructions are forbidden, to only a recreation zone.

“The previous government set such conditions that they have the power to revocate any regulation in every specific case if it is in their or their associate’s interests,” said architect Zurab Bakradze at a meeting against the tree cutting at Turtle Lake.

In late June 2011, Tbilisi City Hall decided to separate a land plot from this area and auction it off. According to the terms of the auction, the buyer was mandated to build a two-floor restaurant with a hall for banquets and concerts.

“It is unclear why the Tbilisi City Hall found it necessary to auction the land plot under these narrow conditions, indicating that the privatization process might have been tailored to the interests of a specific private company,” TIG writes in a statement.

Otium LLC, owned by two companies, JSC Hotels and M|Group, where one of the shareholders was Archil Gegenava, MP from the National Movement party, bought this plot on 19 July 2011 for 650,000 GEL.

In 2013, the land plot was sold again and bought by Colorit LLC, a company co-owned by M|Group. Gegenava’s brother, Andro Gegenava, is also among the owners of Colorit LLC.

Bakradze claims that first Gegenava, whose party was in power at the time, was interested in building a restaurant there. Tbilisi City Hall first changed the status of the plot to a recreation zone and allowed construction there, and then sold it to the MP.

People have gathered several times at Turtle Lake to protect the area and wrote a petition demanding a stop in the planned construction. The petition received more than 1500 signatures in only a few days.

Later, on July 31, Tbilisi City Hall made an official statement, claiming that there is no plan to cut trees and that the owner of the property is required to build a children’s entertainment center and family type recreational zone, so that the environment wont be damaged.