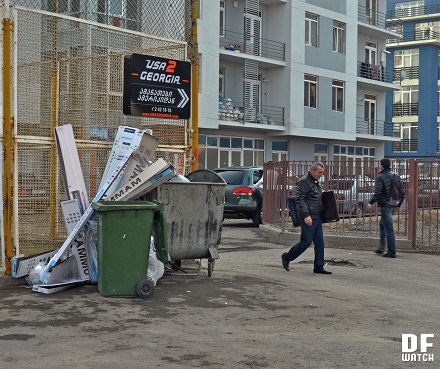 USA2Georgia, one of the companies that offers online shopping to Georgians. (DFWatch photo.)

It is not easy to get onto the company’s list of countries it covers, Deputy Economy Minister Dimitry Kumsishvili said Thursday.

“But thanks to the efforts of the National Bank and the Ministry of Economy we were able to get the services of PayPal,” he said.

Many popular websites have until now not allow customers to register by using Georgian bank cards or Georgian addresses, but from April 10, this obstacle was removed, as a consequence of PayPal’s decision.

Georgia is among 110 countries where PayPal offers its money transfer services, which may be used for purchases on e-commerce websites like Amazon and Ebay.

“Still we can add our American addresses on eBay and pay from our credit cards from PayPal. Some other websites suggest the same solution,” one Georgian user writes on the Facebook page ‘I need PayPal service in Georgia.’

Meanwhile, Kumsishvili says, the government in Georgia is continuing to negotiate with PayPal, the company which is often credited with resurrecting online business after the dot com bust in 2001.

According to the National Bank of Georgia, the number of internet transactions in January 2012 increased by 162 percent compared to the same period in 2011.