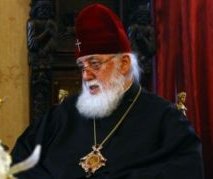 TBILISI, DFWatch–Georgian Patriarch Ilia II has met with Viktor Gamm, vice president of Billy Graham Evangelical Association which faced some hurdles when it organized Festival of Hope in Tbilisi.

The patriarch expressed his sorrow about the way the organizers had to hold the festival on June 6-8.

A person working at the festival, informed that the organization agreed with the administration at Sport’s Palace to hold the festival there and made a payment several months before.

But on June 3, the hall’s administration refused to let them use the rented space because of a small fire on the roof of the building.

Temur Giorgadze, head of the emergency service in Tbilisi, said the fire didn’t cause serious damage. Still, the administration of Sport’s Palace told the organizers of Festival of Hope that they couldn’t use the rented space for the next week.

The result of a government investigation of the building, conducted the following day, was unknown till the end of the festival. Festival organizers sent independent experts, but the Sports Palace administration didn’t allow them into the building.

After this, organizers tried to find another place to hold the festival. The person from the festival says they were denied using Locomotive stadium, Dinamo stadium, Circus and other public places, all answered that there were planned other event there.

In the end, the festival was held in the yard of a church in Didube, a district in Tbilisi, but even there participants were disturbed by Giorgi Gabedava, an independent candidate for Tbilisi City Council in June 15’s local elections, who is known for his extremist actions, and other orthodox Christians, who called on people not to attend the festival.

Several Orthodox protesters stood at the entrance, asking everyone passing through not to enter. Some of the comments by the Orthodox were: “How much did they pay? Don’t sell your soul for money.” “Do you know where you are going? They are lying, it’s an evangelistic meeting.” “At least don’t let your child in.”

“We think that all these barriers indicate that there was discrimination on the basis of religion,” the NGOs wrote in a joint statement. They demand an investigation of the fire at Sports Palace and call on the government to help organizers hold the festival normally but any significant measures have not been taken.