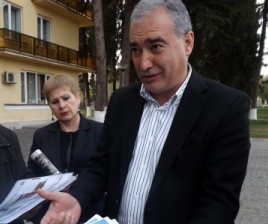 Pulled out, but won. Merab Topchishvili received 52% of the votes in Marneuli and will become head of municipality. (Interpressnews.)

TBILISI, DFWatch–A Georgian politician who withdrew his candidacy one day before Sunday’s local election seems to have won by an absolute majority.

Merab Topchishvili and the Georgian Dream coalition each held press conferences last week to announce his withdrawal from the race, in the wake of a complaint process against the cancellation of a competitor’s registration.

The stated reason for withdrawing was to promote Azeris, who make up 83% of the population in the town Marneuli, 30 km south of the capital Tbilisi. Two other candidates vying for the job as gamgebeli, or head of municipality, are ethnic Azeris.

But despite announcing that he was pulling out, the deadline for withdrawing a candidacy ended ten days before the election, as DF Watch has reported. Therefore, Topchishvili name remained on the ballot-papers.

And now it seems his withdrawal was premature, as Topchishvili received 52.48 percent and an absolute majority. Interpressnews first reported that because he had pulled out of the race, victory went to the runner up, Akmamed Imamkuliev, who got 31.75 percent of votes, according to preliminary figures from the CEC.

But later on Monday, Topchishvili said that he doesn’t want to disappoint the voters and will assume responsibility as gamgebeli of Marneuli.

The population made a decision not on religious and ethnic grounds but based on the work done, Topchishvili added.

Imamkuliev represents the National Movement party, which ruled Georgia for almost a decade. It complained against its candidate being denied to register because election officials said he didn’t comply with the two year residency requirement. A court later restored his right to register, overturning the Central Election Commission’s decision.