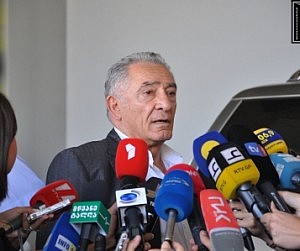 Tbilisi, DFWatch – Gogi Topadze’s party, former member of the ruling coalition, was rejected to participate in the upcoming parliament election by the Election Administration (CEC) together with 24 other minor parties.

According to the CEC, Industry Will Save Georgia (IWSG), also referred as Industrialists Party, failed to submitted complete electoral list in time.

The party is led by Gogi Topadze, who is notorious for his anti-NATO statements and owner of Kazbegi brewery and some other businesses.

The party will appeal the decision at the Tbilisi City Court.

Zurab Tkemaladze, the head IWSG faction at the parliament, insisted on Monday that party had followed all regulations and submitted documents properly.

“Seems it’s subject of interest for many parties, including the ruling party, as we have MP candidates who will obviously win,” Tkemaladze said.