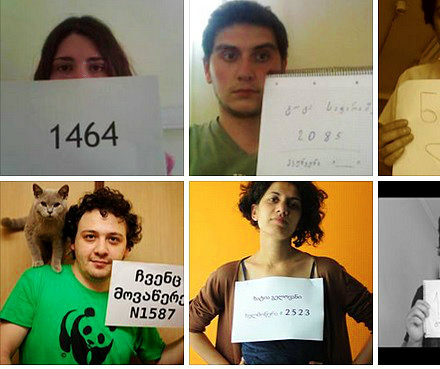 TBILISI, DFWatch–The head of the Georgian parliament’s human rights committee has come under fire on social networks, after she instructed her committee to investigate whether 12 000 signatures in a petition are real or fake.

The petition is addressed to the speaker of parliament and demands an adequate reaction to the May 17 events.

The committee is preparing a statement about the incidents on May 17, when radical Orthodox priests and their followers disrupted a small protest by LGBT activists, resulting in almost 30 persons being injured. The draft of the committee statement was published Tuesday and criticized by groups.

People have been posting photos of themselves which show their own number on the list of signatures under the slogan “Defend your signature”, as a reaction to the human rights committee discussing whether their signatures are real or not.

Nana Kakabadze from the organization Former Political Prisoners for Human Rights said at a commission session that: “This is fake, and a criminal investigation should be launched about the fake signatures.”

The non-governmental organization Identoba on Tuesday called for people to write a short letter to Eka Beselia saying that they’ve signed the petition and this way protest against the committee’s action to start thinking about the signatures instead of demanding an investigation of violations on May 17.

“It’s a pity we needed to gather signatures in order to demand publicly committed crimes and it is even more pity that they refuse even this and that is how parliamentarian plans to justify the guilty ones,” the statement of Identoba reads.

Identoba criticizes the draft statement for saying that ‘propaganda of single-sex marriage and relations are special rights, which belongs to rights of the sexual minorities and realization of those rights is a subject of discussion of the international community.’

Identoba, one of the organizers of the disrupted rally on May 17, writes that propaganda of single-sex marriage was never a goal of the rally and that mentioning it in the committee statement is ‘an irresponsible attempt to irritate society.’

The organization also underlines that there are factual mistakes in the draft statement, and it is dangerous to confirm this edition of it as it may even further endanger the rights of people.

In an interview with TV9 Eka Beselia said that civil society hasn’t read the document which they criticize, but she also said that she didn’t distrust people who signed the petition, but that it was a response to a suspicion expressed by other groups in society about the veracity of the signatures.

“For me as chair of the committee it wouldn’t change anything if 20 000 or only 2 people would sign the document instead of 12 000, we would still review it,” she said, adding that she is ready to meet with any group any time and discuss their questions.