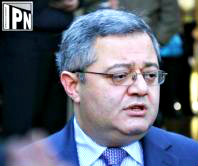 TBILISI, DFWatch–The parliament in Georgia is starting to review a set of amendments to the constitution that aim to balance powers between the prime minister and the parliament, after a draft has been through a process of public discussion.

The hearing process for the draft, which was presented by the governing Georgian Dream coalition, lasted one month.

What is up for revision is a collection of controversial regulations that were introduced by the National Movement party when it was in power in 2010.

Following the changes brought in then, most of the president’s power would be transferred to the prime minister, and he would become both head of government and head of the executive government.

Considering that President Saakashvili after serving two terms would not be eligible to participate in a third presidential election, and given that power will be transferred to the prime minister after the 2013 election, many thought in 2010 that Saakashvili was planning to assume the post of prime minister, but when Bidzina Ivanishvili and his coalition made a breakthrough in politics, this scenario was no longer realistic.

The Georgian Dream coalition has said many times that the constitution will be amended and changes are planned after the presidential election, when it will also be decided what type of government there will be in the country, but earlier it was planned to adopt a few changes which will reduce several of the prime ministers rights.

There will be a new regulation applying to the process of passing a budget. According to the draft, if parliament doesn’t pass a budget bill within two months after the beginning of a new budget year, this will be considered a declaration of distrust towards the government, and if parliament isn’t able to form a new government, the president will dismiss parliament and announce a new election. The government presents a budget draft three months before the end of a budget year, and if parliament isn’t able to pass it before the end of the year, expenses will be covered as defined by the previous year’s budget.

If a budget is not passed, the president has the right to dismiss the government or parliament also under the current constitution.

According to the constitutional amendments which should have been enforced after the presidential election in 2013, the minimum votes required to pass constitution amendments would increase from two third to three quarter, but the ruling coalition in its draft amendment wants to leave it as it is now, so two third, or 100 votes, will be enough to adopt a constitutional amendment. It also wants to keep the same quorum to overturn a veto by the president, which was also planned to be raised from two third to three quarter.

Another regulation is that a Georgian citizen who also has citizenship of another country can become president, prime minister or speaker of parliament. Currently, dual citizens cannot hold these posts, but are allowed to become members of parliament or ministers.

Under Georgian legislation, it is compulsory to have a public review a draft of constitutional amendments and then take into account remarks and proposals from the hearings during parliamentary review. The public review must last one month, after which parliament has to start discussing the amendment.

During the month of public discussion about this draft, there came remarks about giving dual citizens the right to hold the top three positions in the country. The commission that conducted the public review concluded that during public discussions there was a proposal to prohibit dual citizens from holding the top three posts, but also to become members of parliament or government members or any other official positions.

Speaker of Parliament Davit Usupashvili says that parliament will discuss this issue, because the public review commission doesn’t have a right to change anything in the draft, and should only inform parliament about what remarks they received during discussions.

He also said that these are amendments which need immediate review before the amendments of 2010 come into force. When the process is finished there will be set up a new government commission, which will work on improving the constitution and which will involve politicians and society. This process must last at least one year, and then a new edition of the constitution will be adopted, he added.