Farmer cut down peach field in protest against falling prices

Farmer cut down peach field in protest against falling prices 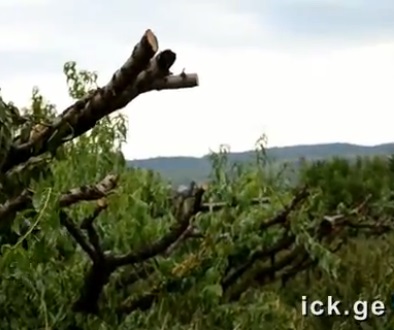 Gia Shaoshvili is the first to carry out a threat by peach farmers to cut down their plantations if the government doesn’t help them. (ick.ge.)

TBILISI, DFWatch–A peach farmer in Georgia has cut down his plantation because the government hasn’t helped him and his colleagues deal with a slump in the market price.

When Gia Shaoshvili , a resident of the village Chumlaki in the eastern Kakheti region, carried through on a threat put forth earlier by the peach farmers in the area and cut down 200 peach plants, he was visited by police and local government officials who demanded to know why he is dissatisfied with the government.

Also TV teams and online reporters flocked to Shaoshvili’s house, and he explained to them that he simply wasn’t able to sell his peaches anymore.

The next day Shaoshvili told Information Center of Kakheti (ICK.ge) that he was surprised the local government and the police had visited him and demanded an explanation, since he never said anything critical of the government.

Peach vendors in Kakheti warned earlier that if they were unable to sell their produce they would cut their plantations down. Shaoshvili was the first to carry out the threat. His family has not had any profit from peaches this year, only losses, as the peach price has been significantly reduced.

As DF Watch reported, Azerbaijan has increased its customs tax for the peaches, which has caused a drastic fall in prices, and sellers cannot even get 15-20 tetris (USD 0.09 – 0.12) for one kilo.

This is too little to cover the cost of hiring workers and spraying pesticides. As reported by Rustavi 2, the family now plans to try growing other kinds of fruit.

“Who could ever imagine that peaches would cost 5 and 10 tetris? Customers came telling me that they would pay only 5 tetris, making a joke of us,” Shioshvili said.

Government representatives say the state is in negotiations with Russia to export agriculture products with wine and mineral water, but that it will take time. But the Kakheti farmers’ peaches will rot in the meantime.

On Sunday, ICK quoted Shioshvili saying that government representatives and the police asked him why he was dissatisfied with the government. He answered that he wasn’t dissatisfied, but had to cut down the peach trees, which didn’t bring any profit.

He added that he didn’t cut down all his peach trees, only 200 out of 320. The rest are still bearing fresh fruits.