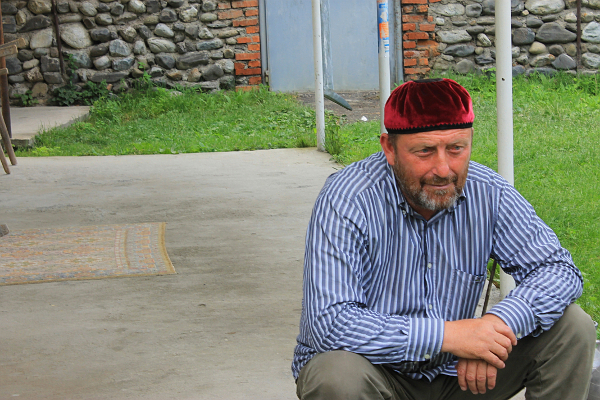 Recently, four people were detained for recruiting new ISIS members in Pankisi Gorge. Journalists on a media tour here organized by the Institute for War and Peace Reporting just before the detentions found that locals were concerned about the rise of radicalism.

The red Salafi (or Wahhabi) mosque, in the center of Duisi is the symbol of the gradual conversion of the locals to Salafism, from traditional Sufism. Nowadays, according to local estimates, over 80 percent of young Kists are Salafists.

It is evident from the emptiness of the Sufi mosque, which is hidden deeper in the village. “People come here, but only a few, and older ones, nothing compared to the new mosque,” said Omar, the imam of the Sufi mosque. He said he doesn’t know how the Wahhabis are able to get so many followers. “I wish I knew, but probably I need to join them to get this secret,” he told DFWatch.

Granted, not every Salafi is going to fight in Syria, but the idea of Jihad is quite popular among young Kists, a subgroup of Chechens native to this part of Georgia.

Zaira, the school teacher of two teenagers  Muslim Kushtanashvili,16, and Ramzan Baghakashvili, 18, who left Pankisi to join the ISIS army in Syria, said that a lot of her students perceive their action as a heroic act: “They are heroes now, in the eyes of their peers. Other boys want to go fight in Syria as well, and girls want to marry them.”

But Zaira and some other locals insisted that the main reason which helps the radicals get more followers is their persuasive ideology. As religion is not being taught in public schools, children in Duisi attend a religious school, located next to the Salafi mosque. Currently, there are about 70 students in this school.

Other reasons behind the popularity of Salafism among the new generation are social exclusion and poverty. Apart from public schools, the only other institution that offers free time secular activities for young people is the community center in Duisi. However, the mosque is a more popular pastime option for young Kists. It offers them a place to meet, exercise and study Salafist teachings.

But the mosque is not the main recruitment scene for the new ISIS fighters. According to Pankisi residents, the main tool of radical Islamists is the Internet and various social networks. The MIA operation confirms this, as the evidence shows that one of the detainees, Ayuf (Gaioz) Borchashvili, used various websites and social network groups, as well as religious literature, to recruit young Kists to go fight in Syria.

The parliament of Georgia has recently amended the Criminal Code to include articles on joining ‘illegal armed groups’ and on traveling abroad to participate in ‘terrorism activities’. Both of these actions are now punishable by up to nine years imprisonment.

As the ISIS recruiters are very persuasive, it seems that religious education could also be used to fight the spread of the idea of jihad in Pankisi, at least that is what Zaira and some other locals think. According to them, it would be useful if the authorities could provide training for the teachers of Islam in Tbilisi. But, according to the staff from the Kakheti Regional Development Fund, an NGO working with social inclusion of Kists and Chechens in Pankisi, there have been such initiatives in the past, but they were not successful.