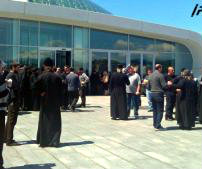 TBILISI, DFWatch–Clerics in Georgia don’t want a Europe where ‘homosexuality is legalized,’ and call on parliament to not pass an anti-discrimination law required for the signing of an association agreement with the EU.

The Georgian parliament has two more weeks to pass the law, as it suspends plenary sessions from May 15, a month before the local election.

The signing of the Association Agreement will take place no later than June and adopting this law is one of the preconditions set by the EU.

The Georgian Patriarch, who is the country’s most influential person, scoring more than 97 percent on opinion polls over who people trust, wants to postpone the adoption of the bill.

The Orthodox Church enjoys great influence in Georgia and it is seen as positive thing to declare oneself a member of the Orthodox Church, and politicians have tried to secure the support of the Church in recent years, because it is politically beneficial.

In addition, clerics used to call on the parish to vote for certain candidates, but after the parliamentary election in October 2012, which led to a change of government, the Church began to interfere even more in political life and now demands to make decisions in accordance with their views, which mainly contradicts the country’s western policy course, although the Church itself claims to support Georgia’s western aspirations.

The Church, formally called the Patriarchate, and some politicians do not want to adopt the anti-discrimination law because they think it is ‘legalization of homosexuality’ and in their opinion this means losing sovereignty over the country, but the government and the lawmakers who wrote the law claim that this fear is groundless.

The bill was prepared by the Ministry of Justice. Justice Minister Thea Tsulukiani explains that when the bill is passed, there will be a specific ban on discrimination on the basis of age, health condition, disability, sexual orientation, gender identity and profession. The draft prohibits discrimination both in public and private places.

The parliament already passed the bill on the first hearing and on Tuesday there was a discussion at Human Rights Committee session in parliament attended by representatives of the Patriarchate and their supporters from the non-parliamentary opposition.

Even though the draft is meant to be against every kind of discrimination, clerics argue that it ‘legalizes homosexuality’ and thus they don’t want ‘such a Europe’, because Europe wants Georgia to ‘legalize’ what they consider a sin, which they see as a threat to the country.

The clerics don’t even want to hear counterarguments, but maintain that any opinion contrary to their own is a sin. Politicians who support them are mainly pro-Russian, and there is therefore a suspicion among some that they want to interrupt the country’s western integration.

MP Tamar Kordzaia from the Georgian Dream coalition left the discussion in protest saying that the clerics are putting pressure on parliament.

“You demand to punish me in this hall. If you don’t like my being in this hall I am leaving the hall for your peace, but what happens here is pressure on parliament, which for me as a parliamentarian, is unacceptable,” she said before leaving.

This caused noise in the hall. Eka Beselia, head of the human rights committee, said that it is not correct to act like that. Priest Davit Lasurashvili told her that Beselia should call on her colleagues not to act like that when they make statements against the Church. Beselia didn’t protect Kordzaia after this.

Clerics also left the hall in protest, saying that it is impossible to reach agreement with a majority. Before leaving the hall, they threatened the government that they won’t mention their names during their prayers anymore.

But some expect that this is a more serious threat than what they have said, but it is hard to say what they are going to do with the help of the parish, who obey the priests without question. Moreover, last year on May 17, when it was planned to hold a small rally to mark the international day against homophobia, clerics brought thousands of followers, showing off that they are able to create disorder. An additional problem is that their supporters mainly are pro-Russian elements, whose direct interest is to bring tension into the situation and interrupt the signing of the Association Agreement.

Another problem is that the non-governmental sector also criticizes the draft on which DF Watch previously reported: https://dfwatch.net/georgian-orthodox-church-opposed-to-anti-discrimination-law-24785

“Russia or Europe: parliament makes this choice today and we must make this choice together,” Speaker of Parliament Davit Usupashvili, who is in Moldova now, told journalists on Tuesday.

He expressed hope that his colleagues will make the correct choice that is necessary for the country.

He reminded people that when Moldova adopted the same law, there were also disagreement about it and MPs who voted for the law were strongly criticized. He continued saying that when the law was passed, the situation was defused the next day and no-one abused the new law.

“We must make a decision which is accepted in the civilized world and we shouldn’t remain with the uncivilized world, with Russia,” Usupashvili said. “I speak much about Russia because our colleagues in Moldova remembered the Russian Patriarch being all active when they were passing this draft.”