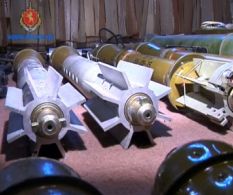 Military type weapons including anti-tank missiles were voluntarily handed over to the police by a 44 year old Georgian man. (Police.ge.)

TBILISI, DFWatch–A Georgian citizen has voluntarily handed over a large collection of military type weapons to the police department in Tbilisi.

It also included more common black market weapons: an AK-74 Kalashnikov rifle, an AKS-74 Kalashnikov, 2,714 cartridges for firearm and 12 magazines for Kalashnikov, according to the Ministry of Internal Affairs.

The ministry has launched an investigation into the case on suspicion of illegal acquiring and possession of weapons.