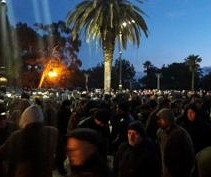 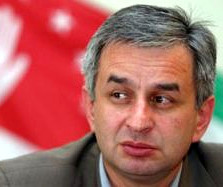 On December 15, hundreds of people converged on the government building in Sokhumi, the capital city of Abkhazia, demanding the resignation of the current de facto president Raul Khajimba.

Another rally, in support of the acting head of the breakaway region, was held nearby. Later, Khajimba announced that following the talks with opposition leaders, agreement had been reached, so he would not step down.

Following the negotiations, Sergey Shamba, the leader of the political party United Abkhazia, said that the president and the opposition leaders reached an agreement to stabilize the political situation in the region.

As a result of the negotiations, the opposition leaders and the authorities of the breakaway Abkhazia signed an agreement on social and political stability, according to the Echo Kavkaza, a Russian language online news service reporting on the Caucasus. The document was signed by President Raul Khajimba, parliament speaker Valery Bganba and leader of the Block of Opposition Forces Aslan Bzhaniya, who was detained and questioned by the Russian police in Sochi in early November.

The agreement says that the de facto president, the parliament and opposition groups will cooperate to appoint a vice prime minister, new Constitutional Court judges and a new prosecutor general of the breakaway region.

According to Apsnypress, Khajimba scheduled elections for Abkhazia’s assembly on March 12, 2017.

Following the collapse of the Soviet Union, Abkhazia, Adjara and South Ossetia broke away from Georgia, but failed to achieve recognition. The bloody Abkhazia War in 1992-93 ended in more than 200,000 internally displaced people and a political stalemate that has lasted until today, with Russia propping up the separatist regime in Sukhumi.

Adjara was reintegrated through force by President Saakashvili in 2004, but the two remaining conflicts remain unsolved and were further entrenched with the Russo-Georgia War in 2008, after which Moscow recognized Abkhazia and South Ossetia as independent states, established military bases there and signed military treaties. Abkhazia and South Ossetia are seeking a non-use of force commitment, which Georgia rejects from a view that the de facto authorities are illegitimate. Instead Georgia considers the territories occupied by Russia.