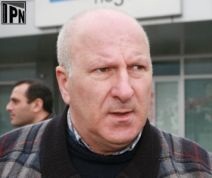 Soon the whole world will know how the government is terrorizing the people, says Bidzina Gujabidze, opposition candidate for Samtskhe Javakheti. (IPN.)

TBILISI, DFWatch – The Georgian Dream coalition Thursday opened a tent in the Samtskhe Javakheti region, because the locals refused to let them rent an office.

The coalition has had problems with rent offices before. It blames the government, saying it does not allow locals to let their areas to the opposition.

“Even though they want to, the locals cannot let their own houses to Georgian Dream because of threats and harassment from the government. That’s why Georgian Dream symbolically opened headquarters next to Adigeni police station,” coalition representatives say.

Bidzina Gujabidze, majoritarian candidate for this region, symbolical opened the coalition’s tent headquarters today. He said soon the whole world will learn how the Georgian government is fighting it competitors.

“The whole world will learn the shameful fact that the Georgian government puts the local population in terror and persecutes it. Even though there are many of our supporters in Adigeni. 65-70 percent supports Georgian Dream here,” he remarked.