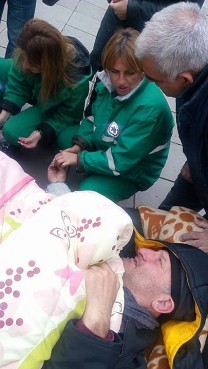 Emzar Kvitsiani, one of the Alliance of Patriots taken to hospital. (Facebook.)

TBILISI, DFWatch–Several members of the party Alliance of Patriots were taken to the hospital on Tuesday after going on a hunger strike ten days ago.

Emzar Kvitsiani, Manana Abuseridze, Lali Khutsishvili and Ada Marshania were brought to Chapidze clinic, while many others continue their hunger strike in front of the government office in Tbilisi.

The protesters were not given right to set up tents, which is why they have to sleep on chairs despite the cold weather in the capital.

Alliance of Patriots is an opposition party without representation in parliament. Members are protesting against the results of the recent by-election in two districts of Georgia, where the party’s candidates in both places lost to the Georgian Dream coalition. They demand to improve the election environment ahead of the upcoming parliamentary election in 2016.

Irma Inashvili, the party’s candidate in Sagarejo, claims that the election was fraudulent and announced a protest rally on November 21 at the government office.

According to Inashvili about 100 people are on hunger strike, about 70 of them in Tbilisi, the rest in other parts of Georgia.