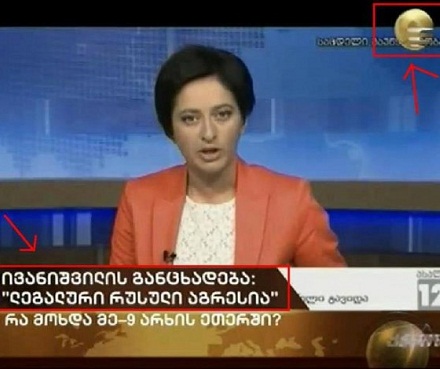 Imedi grabbed onto the word 'legally', ignoring the correction from GHN. The segment was headlined "Ivanishvili's statement: 'Legal Russian aggression'". (Screengrab from Imedi.)

TBILISI, DFWatch – A report sent out by a Georgian news agency led to controversy Tuesday.

GHN’s report said that after Russia became involved in the war in South Ossetia on August 8, 2008, it legally brought military equipment into the region.

This report was read by a reporter live on opposition-connected Channel 9.

GHN issued a statement apologizing and saying that the word ‘legally’ should have been in quotation marks, like it was in the Russian version of the same report.

Po-government TV, ignoring the correction, leaped onto the first report.

Imedi opened its segment, which was initially headlined ‘Ivanishvili’s statement’: “These are the versions which official Moscow has been trying to report for the last four years.”

Later it turned out that one of Imedi’s reporters had read the same statement on Monday, and that the reporter, Keti Kashakashvili, resigned today because of that one word. Imedi made a point out of Kashakashvili being outdoors when she said it, while Channel 9 read the GHN statement from studio – “completely different”, according to Imedi’s spokesperson, Mate Kirvalidze.

President Mikheil Saakashvili didn’t pass on the chance to make use of the incident either. Speaking from the docks in Poti Tuesday, he said, according to Interpressnews: “some Georgian politicians and their media outlets […] claim that Russia completely legally bombed our country”.

“One thing is to hate your own government, but the other thing is justification of aggression against your country and an attempt to conquer and destroy your country,” Saakashvili said.