One man shot dead during intrusion attempt at Tbilisi military base

One man shot dead during intrusion attempt at Tbilisi military base 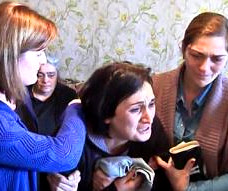 TBILISI, DFWatch–An attempt by a group of people to enter a military base in Tbilisi Sunday morning left one young man dead after the sentry fired shots at the intruders. The mother of the deceased reacted strongly at the implication that her son would harm anybody.

The incident took place at Krtsanisi military exercise and education center, in the south of the Georgian capital.

The Defense Ministry said several persons were warned by the sentry to leave the area. The sentry was then attacked.

“After this, the sentry took the measures determined by the special regulations and eliminated the incident of breaking into the territory,” the Ministry of Defense wrote in a statement.

Afterward, the guard discovered the body of one of the attackers inside the base. A forensic examination has been scheduled to identify the body.

But media reported his name as Giorgi Shengelia. The mother of the deceased, Elza Shengelia, responded emotionally at reports that guns were found at the site where her son was shot dead, implying that this was an armed intrusion attempt. “A man who was afraid of hens, why would such a man be carrying a gun?” she said, quoted by Interpressnews.

Military police investigators have questioned the sentry who fired the shots. The case is being investigated by the military police under the supervision of the Prosecutor General’s Office on the basis of the first passage of article 116 in the Criminal Code about death through negligence.

Head of military police’s department for investigations Zurab Kukhianidze explained that the sentry first shot a warning shot in the air, but the intruders didn’t stop. After that, the sentry shot in their direction. Two people escaped. No-one has been arrested yet.

The family of Giorgi Shengelia is planning an alternative investigation into the incident.