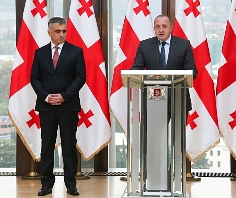 The friendship between the two go back 30 years, the president said, as co-founders of Georgian Institute of Public Affairs (GIPA), which educates media and public relations professionals and teaches other subjects.

Margvelashvili was rector of GIPA before being nominated for president in 2013.

“Me and Davit created the institute which I was head of in the past,” the president said.

“He is one of the most remarkable achievers of my generation, and this is a real personal skill which is important for working at the Security Council, for strengthening the country and its defense capability.”

Margvelashvili called him an ‘interesting and important’ a person with experience in relations with the United States and Russia.

Rakviashvili thanked the president and listed his priorities as strengthening democratic institutions, Georgia’s security and defense capability, as well as mobilizing strategic and partner countries.

“These are the priorities, and the action plan which the president determined for me and the Security Council,” he said.

Sergi Kapanadze from the National Movement described Rakviashvili as a professional and said they worked together in the Georgian delegation during Geneva discussions. Rekviashvili was deputy minister of reintegration in 2010, during Mikheil Saakashvili’s presidency.

“I wish him success, especially in conditions when the major goal of the Georgian Dream government is to reject the president and the Security Council.”

Giorgi Volski from Georgian Dream criticized the president for not consulting with the government before announcing his pick for new NSC secretary.

The post as NSC secretary became vacant after the president appointed Irina Imerlishvili as a judge at the Constitutional Court.