One dead, eight injured as truck slams into minibus

One dead, eight injured as truck slams into minibus 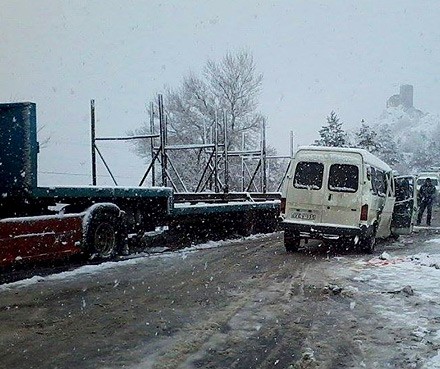 TBILISI, DFWatch–One person died and eight were injured Saturday in an accident in the south of Georgia.

The accident happened on the Tbilisi-Akhaltsikhe highway near Atskuri at about 13:00.

The local newspaper Sknews.ge reported that a truck crashed with a minibus which was driving passengers from Khasuri to Akhaltsikhe.

One of the victims died on the way to the hospital.

One of the injured was brought to Tbilisi the same day with severe injuries. Another person was taken to a hospital in Tbilisi with head injuries. The three others who were injured are still in hospital, the rest went home.

The highway was blocked for about an hour due to the accident.

An investigation has been launched for violation of traffic safety rules resulting in death, a crime which may be punished with four to seven years in jail.