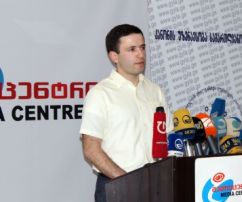 TBILISI, DFWatch–Independent observers in Georgia’s local election say the extent of violations seen so far is not enough to influence the final results.

Presenting the NGOs’ findings, Kakha Kozhoridze, head of Georgian Young Lawyers’ Association, told about an incident at a precinct in Zugdidi where the village trustee reported the discovery of a box with stray ballot-papers.

A member of the election commission at this precinct, Irakli Kerzaia, investigated the case and found hundreds of election envelopes wrapped in a black package in a public school hall next to the room where the voting was going on.

“There is an assumption that these envelopes were from the previous election. We are checking this,” Kozhoridze said.

In Adjara, local observers saw one incident of voting taking place without people being marked and that an observer was prevented from getting access.

“The observer was insulted and there was a possibility of physical insult as well,” Kozhoridze said. “An observer for GYLA was forced to leave the precinct. He wrote a complaints to the district election commission.”

Election observers were also restricted from doing their job in Kartli, where an observer for GYLA could not registered a complaint at the district commission.

NGOs also claim that there were a number of cases of unauthorized people being present at precincts in the name of election subject, monitoring the voting process.

One of the more unusual violations was people finding wrong photos in the new biometric voter’s list, which are used for the first time this year in Georgia. The list has a picture of each voter next to their name, but in some cases the photos were wrong. A woman came to vote and there was a man’s photo next to her name.