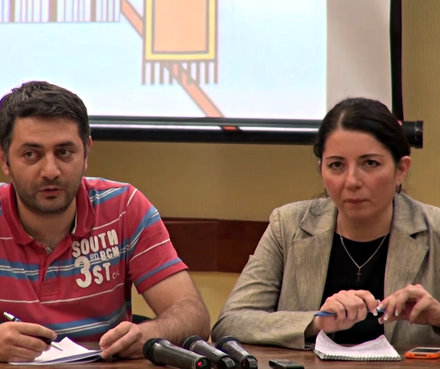 TBILISI, DFWatch–A mother claims a priest forced her daughter to leave a church a few days ago because of her ethnicity. The priest denied this.

Inna Sukiasyan, who is of Armenian origins, last week wrote on her Facebook page and later told journalists that her ten year old daughter went on a trip to the city with her peers. During the trip, the children entered Sioni Church, where the girl did like the other children, lit a candle and crossed herself.

That was when the local priest told the girl that she was incorrectly crossing herself, but the girl explained to him that she usually goes to an Armenian church, where she was taught how to conduct the crossing.

“He [the priest] r told her that those who go to Armenian churches stand far from God and don’t have a right to go to Georgian churches,” the mother says, adding that her daughter concluded that the priest in fact was forcing her to leave and so she left the church.

The mother says her girl goes to a Georgian school, and speaks Georgian perfectly, so she excludes the possibility that the child might have misunderstood what the priest said.

Sukiasyan published a photo of the priest, whom she recognized to be Davit Lasurashvili.

“Thanks to this ‘priest’ for the lesson he taught to my ten year old girl – only difficulties raise a stronger Armenian,” she added.

June 12, Davit Lasurashvili responded by saying that the Orthodox Church is a place of prayer for Orthodox people where only Orthodox are praying. But he also said that neither the child nor her mother nor anyone else was forced to leave the church.

“What concerns the visits, many people, including Armenians, Russians, Orthodox and non-Orthodox, come to our church, as a cathedral, take a look inside and leave and no-one insults them or force them to leave,” he added.

The same day, Ina Sukiasian held a press conference and said that this is not the first time her child is separated due to her ethnicity, but there have also been minor incidents at school involving her classmates.

“They discuss why she doesn’t wear a cross. She is asked if people wear a cross in Armenian churches, and she always answers them.”

Levon Isakhanyan, who chairs the legal department at the Diocese of the Armenian Apostolic Orthodox Church in Georgia, said during the press conference with Sukiasian that any such action may be attributed to interethnic and inter-religious enmity.

“We are hopefully expecting the Patriarchate [the Georgian Orthodox Church, ed.] to observe their position, what they will say about discriminatory attitude of this certain cleric,” he said, adding that the Georgian Church should publicly condemn any type of discrimination from its own representatives.

The Georgian Church has not officially responded.

Mikael Botkoveli, Secretary of the Catholicos Patriarch, told online newspaper netgazeti.ge that he doesn’t believe the cleric at Sioni Church forced a churchgoer from an Armenian church to leave.

He said, according to his information, the priest saw a girl incorrectly crossing herself, but didn’t know that the girl was Armenian. The priest gave her a remark saying that Orthodox do not cross like this.

“Any priest can do the same. Later it turned out that the child wasn’t Orthodox. Any person has a right to enter the church and look at it,” he said. “I don’t know if anything happened afterwards.”

Botkoveli says he thinks this case cannot be a subject for discussion for the Patriarchate, since it was a local issue and has been resolved.

He says there was nothing problematic in what happened as anyone can go inside the church and be given a remark for incorrectly crossing and he says many people go to Sioni and the priest is not able to find out their affiliation one by one.