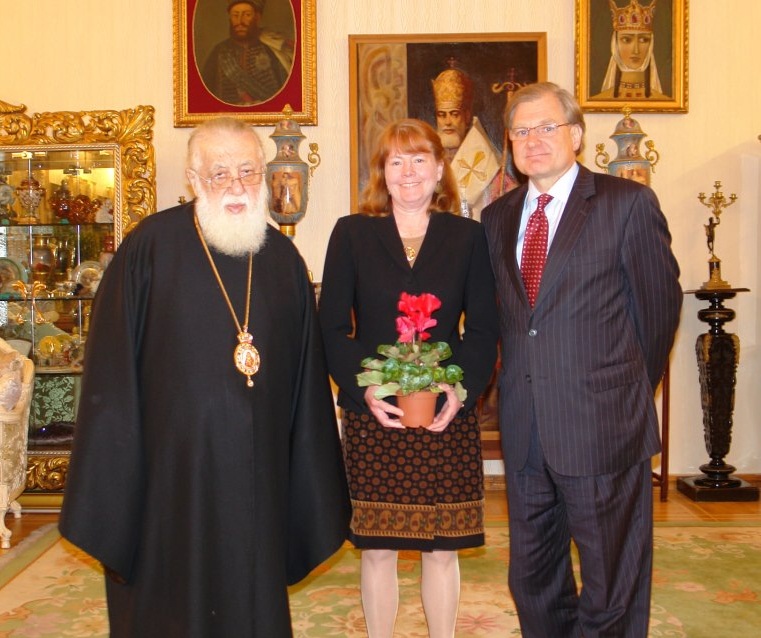 From left to right: Georgia’s Patriarch Ilia II, the ambassador’s wife Mary Hartnett, and US Ambassador to Georgia Richard Norland. (US Embassy photo.)

TBILISI, DFWatch–US Ambassador to Georgia Richard Norland asks the Ivanishvili government to avoid vengeance as it seeks to prosecute many of the people who ran the country while President Mikheil Saakashvili held power.

“There was a need now to balance the desire for justice with the need to avoid vengeance and retribution,” the ambassador said.

Norland on Tuesday met with the prime minister and the president and afterward told journalists that he believes both of them are continuing their efforts to reach a solution to the stalemate in relations between the two branches of power.

The occasion for the meeting was Estonia’s National Day. A reception was held at Radisson Blu Iveria Hotel, which was attended by Norland. He said afterward that the process of cohabitation is in a tense period now as the presidential election in October draws nearer.

The US embassy’s press office says Norland believes President Saakashvili and Prime Minister Ivanishvili are working to find a solution to the gridlocked negotiations about a set of constitutional amendments.

Norland says Saakashvili assured him that he has no intention of dissolving government or make any unusual constitutional moves.

Also on Tuesday, Georgia’s Patriarch Illia II, who is on top of rating of trust in Georgia, hosted Ambassador Norland and his spouse, Mary Hartnett, to speak about the latest achievements in Georgia’s domestic affairs and the attempts by the government and the president’s party to resolve tensions.

Recently there have been attempts to negotiate between the governing Georgian Dream coalition and Saakashvili’s National Movement party to try to reach agreement on important issues in the country. Georgian Dream wants to amend the constitution and limit the power of the president to dissolve the government and parliament and thereby the possibility to create a political crisis.

The National Movement wants to include a passage in the constitution which defines the country’s foreign policy course as western oriented. But the negotiations finally failed, as the UNM also put forth a demand to announce a complete amnesty for former government officials.

Yesterday, the president expressed readiness to visit the prime minister for dialogue, but Ivanishvili has so far not responded.