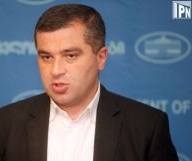 Speaker of Parliament Davit Bakradze says the government will include 17 extra points in the declaration about election ethics. (IPN.)

TBILISI, DFWatch – The government in Georgia will add points prepared by non-government organizations to the declaration of acting regulations for elections. But it is still unknown whether Georgian Dream will join this declaration or not.

Even though legislation defines what rights parties have, at the end of last week, the government suggested a declaration for parties to sign which regulates their behavior.

There are four points in this declaration. Signatories renounce violence during the election campaign, renounce calling for violence and will not use hate speech towards minorities, will not bribe voters, are ready to conduct an election campaign oriented towards subject matter discussions and will act according to recommendations by international organizations.

The campaign This Affects You Too appealed to government to add several points to the document.

Their proposal consists of 17 points and focuses on not encouraging violence and destructive actions. In addition, government bodies should act in accordance with the requirements of law.

On Thursday, Speaker of Parliament Davit Bakradze held a briefing saying that the government agrees with this proposal and adds it as a fifth point to the document.

Speaking on behalf of the ruling National Movement party, he appealed to all parties to agree and adopt all the principles proposed by campaigners.

“I the think document prepared by them really has value. The principles which they suggest are really important and will help us to have a more protected and free election environment.”

The Christian Democrats, the New Rights Party and the National Democratic Party will sign the document. So will the smaller parties which are on good terms with government.

What Georgian Dream will do is no yet known.

But preliminary indications are that the document is acceptable to them except for one paragraph, which says that the signatories take responsibility for recognizing the results of vote counting by the Central Election Commission, and the results recognized as legitimate by well-reputed observater organizations.

Georgian Dream says this paragraph needs to be more precise, but generally the idea is acceptable for them.

Maia Panjikidze, spokesperson for Georgian Dream, said the document should be prepared through the engagement of parties and NGOs, but the ruling party appropriated this process.

This Affects You Too member organizations also say that the principles of this agreement shouldn’t come from one single party and principles suggested by the ruling party aren’t enough. This is the reason why they presented this 17-point initiative.