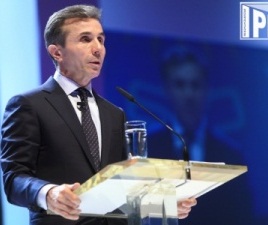 TBILISI, DFWatch – Saakashvili’s main competitor, who accuses the government of abusing the legal system to intervene in his party’s election campaign, offers the government 10 million lari, or USD 6.1 million, as assistance to people affected by the recent storm.

The government has not yet answered, but says this proposal is political opportunism.

Bidzina Ivanishivli is ready to help affected with his own expenses. Maia Panjikidze, spokesperson for Georgian Dream said Thursday that the businessman is ready to get engaged in the rebuilding work in the disaster area.

Speaker of Parliament Davit Bakradze told DF Watch that he advises Ivanishvili to ask Prime Minister Vano Merabishvili about this issue. President Saakashvili has put Merabishvili in charge of the restoration work. But in Prime Minister’s office they say they do not have time for this.

“The president and the government, which unreasonably spent 100 million of reserve funds which were set up for such situations, now plan to just partly compensate losses and for fully lost harvest allocating maximum 1 500 lari. And this happens when the loss for families is way more than this amount.”

She also says that the government will not let Ivanishvili personally help affected people, as this will be considered bribing voters.

“So in this situation I made decision, and at this stage I transfer 10 million lari into a state account indicated by the court. After the losses suffered because of the disaster are fully calculated, I will transfer the necessary amount of money to the state by the same mechanism,” Ivanishvili states.

He remarks that this money will give the government the opportunity to fully compensate the population’s losses and considers that it is important to set up civic monitoring which will objectively measure the losses of each family and timely and full compensation.

“There can be talk about cooperation with the government and engagement in this regards, when so many people are affected by a disaster. But how I don’t know to what extent Ivanishvili can handle this and how much it is his own desire. If all this is just to score more political points by opportunism and law violation, then it’s no good and it’s illegal.”

He says when there is a disaster, any person, including billionaires, can have honest desires.

“There is a government headquarters which is set up for disaster management and he can speak with them. But some statements, controversies and Mrs Maia Panjikidze’s performances make me think of other things,” Darchiashvili said.

He explains that Panjikidze shouldn’t define how the budget law works in Georgia and how court makes decisions and where and how fines are directed.

“Speculation with topic on fines isn’t really a clean political game. A fine is a fine, and charity is charity.”