TBILISI, DFWatch – Political parties are not planning any commemoration of the events of November 7, 2007. Only the Labor Party had planned a rally which was already underway at 15. But that is held to demand the resignation of president Mikheil Saakashvilli. Former member Nestan Kirtadze calls the event a ‘political adventure’.

On November 7, 2007, police forcefully dispersed a peaceful protest camp in front of parliament organized by the opposition. Police also stormed the TV channel Imedi and used force against the journalists while they were live on air. The events of November 7 lead to president Sakashvili temporarily stepping down and scheduling a snap presidential election the following January.

The police’ actions that day have not been investigated up until today and no charges have been brought to bear on those responsible.

At the end of October, the newly formed faction Unity for Justice, a group of opposition parliamentarians, began to study the events of November 2007 and demanded that there is started an investigation with the aim to ‘establish real democracy in the country’ and because there are still many unanswered questions regarding the events. 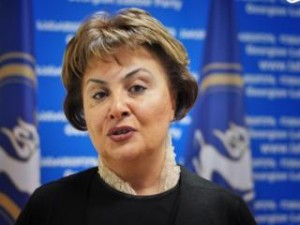 There are no commemmorating events planned by oppositional parties for today’s anniversary.

DFWatch called representatives of the Free Democrats, the Christian-Democratic Movement, Free Georgia Party, New Rights Party, the Conservatives, the Free Democrats, the Georgian Party, Georgia’s Way and National Forum, but all of them gave the same answer: “We do not plan any events for this day, and we are not going to participate in the Labor Party organized rally.”

Labor Party has released an announcement about the November 7 rally saying their demand is for Saakashvili to resign and is announcing a season of resistance this fall.

“The world should once again see that we didn’t kneel down, weren’t ‘enslaved’ and that we will continue fighting. We begin fighting through the rounds and in any round we have to lay Saakashvili on his shoulders. We have announced an open tribune and whoever comes, can appeal to people and no union or separation is needed,” Labor party leader Shalva Natelashvili announced.

But none of the opposition parties will join the Labor Party rally. Former Labor member Nestan Kirtadze calls it a political adventure. “I think that this rally is organized by Saakashvili, and the Georgian people should stay clear of a Saakashvili organized rally, [whether it is] on November 7 in front of parliament, or any other [such] demonstrations,” she says.

“Saakashvili’s aim is to create a fake revolutionary rally euphoria, which will give him a chance to repeat the exemplifying punishment of the people, again fill the jails, tackle people again, stir up fear, and on such background announce early elections, his only chance to survive politically,” she says, adding that the Georgian government should be changed through elections. “And none of the ventures have any right to change the union between our country and people, moving towards a decent future.”