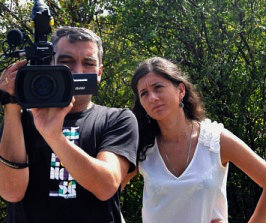 TBILISI, DFWatch–It is still unknown whether three Georgian journalists detained by South Ossetia will be released today. Neither the Ministry of Internal Affairs nor EUs Monitoring Mission have been informed about when they will be released.

The Foreign Ministry of Russia has accused the TV crew of attempting to bring tension to the current situation.

Representatives of EUMM say that negotiations with Tskhinvali are in progress but no further details are known.

The three are employees of TV 3, which is formerly known as Real TV and has close links to Georgia’s Ministry of Internal Affairs. Their journalists often accompany police on field operations.

Vakho Lekiashvili, Bela Zakaidze and Mikheil Mikhoev were detained on Tuesday at the village Adzvi by Russian soldiers for border violation and placed in detention isolator in Tskhinvali, the administrative center of South Ossetia.

This is a Georgian region which broke loose in 1991 but has failed to be recognized by more than a handful of countries. Since the 2008 war, Russia has maintained bases in South Ossetia and the security service FSB is protecting a de facto border, recently stepping up work to put up fences and barbed wire.

Russia’s Ministry of Foreign Affairs on Wednesday wrote in a statement that April 15, Russian border guards were normally protecting the border when they detained three Georgians on the territory of South Ossetia.

“Violators of the border deliberately and demonstratively moved from the village Adzvi to a populated area in South Ossetia,” the statement reads.

The ministry claims this was a demonstration planned to bring tension ahead of today’s meeting between Georgian and Russian negotiators in Prague.

Prime Minister Irakli Gharibashvili said on Wednesday that the detention of Georgian journalists harms the process to normalize relations with Russia. He said the Interior Ministry is doing its best to secure the release of journalists.

He said there is a part of people in Georgia who want Georgia to mend relations with Russia, but another part of people who want to bring tension to the current situation.