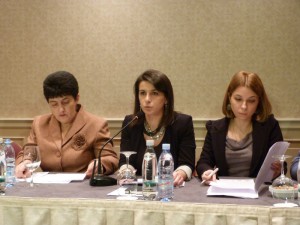 TBILISI, DFWatch – Tuesday Georgia’s new election system should have been passed in parliament, but the package of bills was stopped in the last minute by a group of rights activists, who warned of potential problems.

The groups are sounding the alarm that the new election system does not create a level playing field.

Several experts and non-governmental organizations (NGOs) think the rules are not only unfair, but also a hindrance to a democratic development in Georgia. Whereas a fair election environment and a competitive environment with equal conditions are necessary for a democratic development of the country, they point to many shortcomings in the proposed rules, pointing particularly to changes in the Electoral Code and the law about Political Unions of Citizens.

The crux of the matter as they see it is that there are new restrictions on party financing. These make it hard for private players to affect the process. But on the other hand, there is not a correspondingly strict regime imposed on how the public makes use of its resources in the election campaign. This could lead to a misuse of public offices for campaign purposes, as seen in the last election.

“The proposed legislative changes establishes strict and non-proportion restrictions for the private sector, while the government has the opportunity to use the administrative resources and wide campaign possibility,” the NGOs’ statement says.

They call for the government to adopt legislative changes which “will provide freedom of speech for the private sector and voters; create equal and competitive environment for political unions; will not apply strict and non-proportional restrictions on business, NGOs and voters during the election campaign; will not create the possibility for diws interpretation and will not create a danger to ordinary voters and legal entities,” reads the statement, signed by Georgian Young Lawyers Association, International Transparency Georgia, Society for the Fair Elections and Democracy, Coalition freedom of choice, Open Society Georgia and the other NGOs working on the electoral issues.

The government has put forth a broad initiative, not only changing the two laws mentioned, but also modifying the constitution. But the NGOs pointed especially to the changes regarding party financing, rules which might directly affect themselves. According to some analysts, the rules could mean that human rights groups will fall under the law’s definition of ‘political union’, if their work is seen as benefiting a political party. Therefore, they will be subject to the new tight restrictions on party financing (see graphic).