TBILISI, DFWatch – Tbilisi City Court has declared partially invalid a decree issued by President Mikheil Saakashvili on October 11 regarding a businessman and his wife’s citizenship. 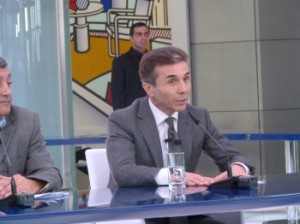 The court said the president had acted illegally when he issued the decree which revoked the citizenships of the couple, but only in dealing with the businessman’s wife, Ekaterine Khvedelidze. When it comes to Ivanishvili himself, the court upholds the president’s decision, and he is therefore still prevented from participating in politics.

A large crowd of people tried to push their way through the doors of the small court room to listen to the court’s decision. The judge took only a few minutes to read the ruling, which ended saying that the court partly satisfies the appeal, after which the lawyers ‘partly thanked’ him.

Lawyers working for Ivanishvili greeted the ruling as somewhat of a victory.

“We have won the court process in the part of the appeal about Ekaterine Khvedelidze. The court said that the president illegally revoked her citizenship. According to the court’s decision her Georgian citizenship will be restored,” Eka Beselia, one of the lawyers told DFWatch.

But on the other hand, she says that in case of Bidzina Ivanishvili, ‘the judge didn’t dare to be just and legal’.

All through the case, lawyers have been claiming that what lay behind the president’s action was a political game, since Saakashvili apart from being president is also the leader of the National Movement party, and he wanted to get rid of a political opponent by taking his citizenship away. Georgian legislation says that non-Georgians can not engage in politics or finance political parties.

As for Khvedelidze the court decision says that the action wasn’t in accordance with Georgian legislation, as Khvedelidze had already been the Russian and French citizen before being granted Georgian citizenship.

Ivanishvili’s lawyers now argue that his citizenship also should be restored, as the two cases are basically the same.

“The appeal of Bidzina Ivanishvili wasn’t satisfied only on a political basis. As for the legal basis, it was the same in the both cases – 40 articles have been violated, based on which the court had the opportunity to fully satisfy the appeal, but satisfied it partly,” Shalva Tadumadze, the other lawyer says.

A number of times the businessman’s lawyers expressed surprise and called it a mystery why Khvedelidze’s citizenship was terminated, because of the complete lack of any legal grounds for doing this. Shortly after the court’s decision was announced at 2 pm today, Georgia’s ombudsman Giorgi Tugushi revealed that that he had sent the president an opinion saying the same thing; that he did not have constitutional rights to rob Mrs Khvedelidze of her citizenship.

Tbilisi City Court published a short press release about today’s ruling, explaining that the decision to reject the claim in regards to Bidzina Ivanishvili’s citizenship was based on article 32, sub-paragraph 4, of the organic law about Georgian Citizenship, which says that a person will lose citizenship if he or she becomes citizen of another country .

The judge thereby based his ruling on the same article of the law as the one lawyers for the president’s administration and the Civil Registry have been repeating during the proceedings. Their argument was that article 32 applies to all the citizens no matter how a person received citizenship, whether it was granted or via naturalization or birth.

Lawyers for Ivanishvili argued that since Ivanishvili was granted his citizenship for reasons of special merit to the country, revoking it should be treated differently, pointing to a paragraph in the Georgian constitution  about this.

Now that Ekaterine Khvedelidze has her citizenship back, there is speculation that Ivanishvili could let her be the formal leader of his party.

The group says that they are working according to a special plan they have worked out, and will ‘continue fighting so that ivanishvili’s citizenship will be restored.’ First step is to appeal today’s ruling within the 14 days timeframe.

Also in today’s ruling, the President was ordered to pay 100 Georgian lari in court fees.