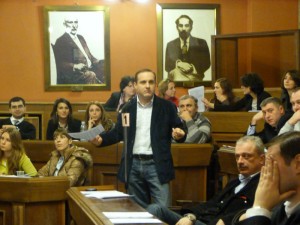 TBILISI, DFWatch – As a bundle of election related bills are up for final review in parliament, it became clear Tuesday that the ruling party is against a proposal prepared by media workers about how to conduct monitoring of media fairness during the election campaign.

The proposal concerns changes to the Election Code and the law about the Political Unions of Citizens, two of the most important laws being updated.

On several issues there was not agreement, and parts of the changes were therefore postponed to the third hearing later.

Media monitoring is important, because the media in Georgia has been met with significant distrust from the population. The national TV networks are seen as fundamentally pro-government, and during past elections there have been gross violations of ethical standards, including a staged shooting on election day in May 2008, which appears to have been part of a PR exercise by president Mikheil Saakashvili to mobilize voters.

In addition to direct violations, the coverage is largely perceived as biased and favoring the authorities, with national networks regularly providing the government with opportunities to hold spectacular upbeat campaign-like TV appearances with few if any critical questions asked by reporters.

The purpose of media monitoring is to keep a check on the total reporting voters are presented with and contribute to more balance and a generally higher ethical standard.

The media group’s proposal was prepared by Lasha Tugushi, Eliso Chapidze, Zviad Koridze, Vakhtang Khmaladze and Alexandre Baramidze, with the support of the EU and technical assistance from the United Nations Development Fund. The bill package is already initiated in parliament and the parliamentary speaker ordered the judiciary committee to review these bills Monday at a special bureau session.

One of the media group’s suggestions is to make some provisions to establish a clear separation between news and advertisement, so as not to allow hidden advertisements for a candidate, something which may have more influence on society than an advertisement.

The group has been working on a definition of what a ‘hidden advertisement’ is and establishing sanctions for violations. It’s still unknown what kind of restrictions these will be.

Whatever should be written into the law, TV stations will be obliged to give an opportunity to place the commercial advertisement, but the opposition parties won’t be able to do this, despite the public funding they will be receiving. Parties which overcome the minimum threshold will receive one million lari from the state to cover election campaign expenses; 300 000 lari of this amount should be spent on advertisements.

Yet another issue is how fair the decision is and where political parties will get money from, when they will only be able to get 100 000 lari credit from banks. Going by the current prices, political parties will only be able to buy 50 minutes of air time with the 300 000 lari of public funds, which is very little for a two months long election campaign.

The media group considers it necessary to calculate the average price for paid advertisement based on the net income for the average amount of advertising from the previous year by the advertising company, without VAT.

The initiative also foresees that the free advertising should be compensated for by the state, so as not to harm the commercial channels’ interests. But the final positions aren’t yet formed on the amount of the compensations and the group thinks it should be decided after further discussion.

In addition, setting up the media monitoring council is also foreseen here.

According to their initiative, this council should be a legal person under public law, and should be set up with the Central Election Commission (CEC) or the Communications Regulatory Commission. Considering the fact that the Regulatory Commission doesn’t have much of the public’s trust today, the initiators want to set up the council under the auspices of CEC.

They suggest a council consisting of 9 or 12 members. There should be a requirement of 10 years’ journalist experience. The right to name candidates should be granted only to non-governmental organizations (NGOs) working in this sphere. There is an opinion that half of the council members may be named by political parties. But the group thinks the best solution would be if only NGOs will be allowed to name candidates, because this body wouldn’t be dependent on anyone. 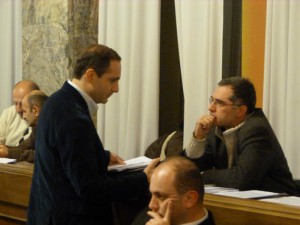 As for the council’s functioning the experts consider that the working criteria should be established by the members themselves. The goal will be on the one hand to conduct the monitoring of media activity and on the other hand to react to complaints.

CEC should react based on the conclusion of this council and the district commissions, as well as the communications commission. 30 minutes once a week, and one hour for the election period, the Public Broadcaster should provide information about the council’s activity.

The non-governmental sector also supports this initiative of the media experts.

But some representatives of the parliament majority claim that it’s unacceptable to regulate these issues in this form.

Akaki Minashvili of the ruling National Movement said: “there already is a special formulation in the bill that during the election period, companies which have a desire to broadcast the political processes will be obliged to hold debates and it doesn’t need any extra regulation. As for the paid advertisement limit or the establishment of a roof, I’m against this, because it will not be fair and what’s important, we cannot intervene in editorial policy.”

Chiora Taktakishvili, also from the ruling party, says that the monitoring will be conducted by an international company on the order of the Communication Regulatory Commission and this companies ‘doesn’t need to be established by rules of working by the political parties.’

Levan Vepkhvadze of the opposition Christian Democrats said he already spoke about this issue with Pavle Kublashvili, chairman of parliament’s judiciary issue committee, and the government is ready to accept some issues from these initiatives. According to him, these issues are about election debates, establishing a limit for paid advertisements and regulating hidden advertising. As for the issue free advertising compensation from the state, outdoor advertising and media monitoring, the government is not going to change its position, Vephkvadze says.