NGOs demand the creation of an independent investigative body

NGOs demand the creation of an independent investigative body 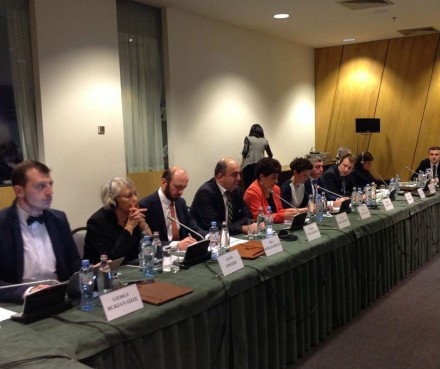 The discussion revealed disagreement on the major issue, whether to grant this new body authority over criminal prosecution. The government claims that there is no urgency in taking the power to carry out prosecution from the Prosecutor General’s Office, but NGOs believe that without the ability to prosecute, the new body won’t be able to change anything.

The conference was held at the Holiday Inn Hotel. Open Society Georgia Foundation is one of the organizations which worked on drafting a bill to create the independent investigative body. The conference was attended by Minister of Justice Thea Tsulukiani, Minister of Corrections Kakha Kakhishvili and representatives from the Prosecutor General’s Office, foreign diplomats, NGO representatives and experts.

About 20 organizations worked on the draft bill, which would investigate cases of torture and mistreatment. The draft proposes that the new body would be headed by a person elected by parliament, and serve for a seven year term. The draft suggests that the person will have the title ‘commissioner’ and be obliged to report to parliament twice a year. The body will have a staff of investigators and be empowered to prosecute crimes committed by law enforcement.

Tsulukiani left the conference without making any comments, but her deputy Alexandre Baramidze told journalists that there is a political will in the country to set up an independent investigation service, but it is not correct to take away the power to prosecute from the Prosecutor General’s Office.

Keti Khutsishvili, Executive Director of OSGF, told DF Watch that the Prosecutor General’s Office might have a conflict of interest while investigating certain cases.

“Like cases related to torture, which used to be systematic in the country, remain unresolved only because the Prosecutor General’s Office is not interested in investigating crimes of other prosecutors,” she explained.

Public Defender Ucha Nanuashvili sided with the NGOs. He told journalists that there are problems in the system and creating an independent investigative body would be the proper response to torture and mistreatment.

Minister of Corrections Kakhishvili thinks creating ‘a new minister’ is not a way to address the problem.

“God knows who will hold this post and how it will end,” he said, adding that he doesn’t like the idea of creating a separate body.

Ana Natsvlishvili, head of Georgian Young Lawyer’s Association, didn’t agree with him. She told DF Watch that currently, only the Prosecutor General’s Office can investigate crimes committed by the their own office; no other body can do that under present legislation.

“Georgia has been challenged by this problem for many years,” she said, adding that the minister’s argument is not a hindrance to setting up an independent investigative body.