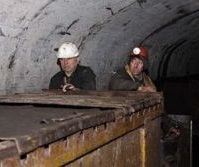 Miners and factory workers in Georgia have held many strikes protesting against the unfair conditions for workers. (Interpressnews.)

TBILISI, DFWatch–After eight months of preparations, an amended labor code has come into force after President Saakashvili signed the bill.

Deputy Justice Minister Alexander Baramidze says the new labor code entirely meets European standards, which will contribute to establishing healthy labor relations in Georgia and protect the rights of both employer and employees.

“No-one will be able to fire a person without any motivation and explanation,” he said. “No-one will work extra hours without compensation.”

The draft prepared by the Ministry of Justice was changed several times during the review process, as it had opponents from business communities and members of parliament with a background from the business sector.

“The Labor Code will now protect both sides as much as possible – the interests of the employer and the employee,” Baramidze said.

Also with the new labor code, pregnant women cannot be fired and are allowed to go on maternity leave. According to changes, if someone works more than 40 hours a week, they must get compensation. The amount will be agreed between the parties. The labor code also allows the signing of collective contracts, which has been a subject of dispute in many of the recent strikes among factory workers in Georgia.

President Saakashvili and his National Movement government amended the Labor Code in 2006, stripping away almost all protection for employees, in order to attract more foreign investments. This led to a brutalization of the workplace, where people could be fired without explanation, women could be fired if they got pregnant, and there could not be signed collective contracts.

Justice Minister Thea Tsulukiani Friday wrote on her new blog that the new law doesn’t protect the rights of employees so much as what would make socialists happy, but it does prevent people from getting fired without explanations or be forced to work day and night.

“Our next goal is to protect the rights of women in labor relations,” she writes.