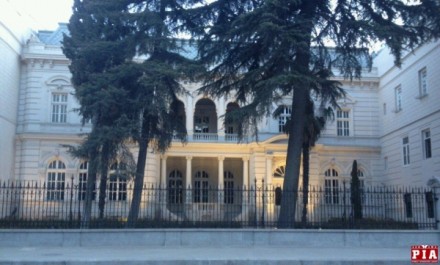 TBILISI, DFWatch–Refurbishment work in a building intended as a new presidential palace is now finished and this has sparked a new round of bickering between the president and the government.

The minister of regional development and infrastructure stated during a government sitting on Monday that the refurbishment work on the building, which lies in Atoneli Street, had been concluded, yet it was still unknown how the government would handle it as the president flatly refuses to vacate his current, and by far larger, Avlabari palace.

The Atoneli palace is located in Old Tbilisi, near Freedom Square, in an old building which used to be the embassy of the United States before it moved to a larger building on the city outskirts. However, it seems modest in comparison to the Avlabari palace, which was built recently by Saakashvili on a hill overlooking the center of Tbilisi, on the left bank of the Mtkvari river.

Davit Shavliashvili, Regional Development and Infrastructure Minister, said during the government sitting that Atoneli Palace has been designed to meet presidential standards.

“[Refurbishment] work meets all standards [to cater to] the first person of the state,” Shavliashvili said, and resigned the next day, officially due to his health condition. 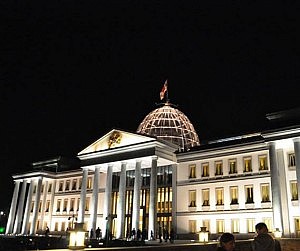 The president is firm in his decision to stay in the Avlabari palace. On Tuesday Giorgi Margvelashvili said to journalists that the showdown over the place of the President Palace stemmed from his ‘personal confrontation’ with the former Prime Minister, Bidzina Ivanishvili.

“Unfortunately, Batoni Bidzina can’t accept the situation when we take decisions by ourselves,” Margvelashvili said. “I have to defend my dignity and not to pursue directives.”

“Unfortunately, this is a matter of the personal controversy between me and Mr Bidzina,” Giorgi Margvelashvili concluded.

Rumors persist that the government’s next step will be to issue a decree ordering the president to vacate the Avlabari palace and move to Atoneli Street. When asked by journalists on Monday how they would react if such a decree is issued, Kakha Kozhoridze, the president’s adviser for human rights issues, answered that ‘it would be extremely extraordinary if any [state] institution plans to move the presidential institution to another building without [the president’s] consent… I’ve never heard of such a thing happening anywhere.’

However, on Tuesday, Prime Minister Irakli Garibashvili dispelled these rumors, stating that no-one has planned any action in this direction.

The wrangling over where to locate the president’s administration was what first triggered a split between then Prime Minister Bidzina Ivanishvili and newly elected president, Giorgi Margvelashvili, then his protégé.

Ivanishvili was not pleased that the man whom he had handpicked to run for president ignored his ‘advice’ not to enter into the house built and bragged about by his worst enemy, Mikheil Saakashvili.

Since then, Ivanishvili has always criticized Margvelashvili over this decision in almost all his public appearances. He says the Avlabari Palace is too luxurious for a president with restricted powers, in such a poor country as Georgia.