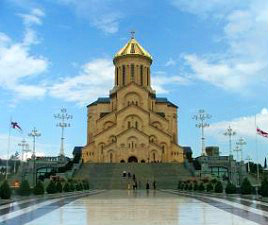 TBILISI, DFWatch–The Georgian government has allocated up to GEL 200 million for the Georgian Orthodox Church over the last 11 year, according to Transparency International Georgia (TIG).

The group has requested information about the funding by central and local authorities of various religious groups, and found out that since 2002, when the Concordat – the agreement between the Georgian Orthodox Church (GOC) and the state – was signed, the GOC’s ruling body, the Patriarchate, has received up to GEL 200 000 000 (about USD 120 million by 2013 exchange rate) of public money.

The Church’ sources of financing include: voluntary contributions, corporate income, investments, grants, donations, and other income received in accordance with applicable laws.

“The chief sources of income of the Georgian Apostolic Autocephalous Orthodox Church are private donations and funding received from the state institutions. We think it is important for the public to be aware of the funding that the Georgian Patriarchate receives from the state budget,” says TI’s survey.

TI found out that as the state budget grew, so did the governmental funding of the Patriarchate after Rose Revolution in 2003. There were cases when funding increased nearly threefold annually. After the war between Russia and Georgia in 2008, the Patriarchate received double the amount of state funding of GEL 26.49 million, or USD 16 million (in 2009 currency rates).

GEL 25 million (USD 15 million) has been allocated to the Patriarchate for the year 2013.

TI has mentioned that several administrative bodies have openly stated that they are not financing religious denominations other than the Georgian Church, while others left the organization’s question unanswered. TI still has several confirmed cases of government subsidies to other religious denominations between 2002 and 2012. In 2010, under a presidential decree, the Yezidi Union of Georgia received 1629 square meters of land in Varketili (Tbilisi) district for a payment of one lari, with the purpose of building a Kurdish cultural center for Kurdish and Georgian languages, history, culture, and computer training courses. The financial assistance to the Georgian and Armenian churches in the years 2009-2012 numbered GEL 35 624 (USD 21 500).

TI claims that it was quite difficult to get information about the funding of the Patriarchate from most administrative bodies and calls on the government to make religious denominations more transparent.