New day of protest against hotel in Vake Park

New day of protest against hotel in Vake Park 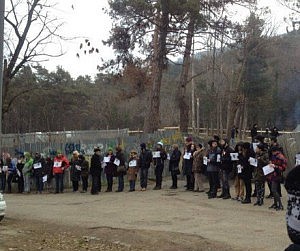 TBILISI, DFWatch–Environmental activists in Tbilisi on Wednesday continued their protest against the construction of a hotel inside one of the city’s central parks.

City Hall decided to fine the company for minor violations, but protesters want a halt in the construction work.

In January, City Hall fined the company which is building Hotel Budapest in Vake Park. The reason was violations of architectural regulations; among other things, not having a construction banner at the entrance to the site and one of the holes of the front facade is outside of the designated area.

The USD 2,000 fine prompted a temporary halt in the construction work and will be increased to USD 8,000 if the violations are not corrected.

The construction company is Graal Ltd, while the owner is registered as Tiflis Kostava. The price tag for building the hotel is USD 22 million.

Activists in Guerrilla Gardening, a group of environment activists who have been protesting against the construction of Budapest Hotel since the very beginning, don’t like the idea to only fine the company. They want to halt the construction work and have collected more than 15,000 signatures demanding exactly that, addressed to City Hall.

Apart from the hotel itself, another problem is that if the hotel is built a narrow road will have to be expanded in order to allow for two-way traffic. This will mean cutting down more trees.

Aleko Elisashvili, an independent member of the City Council who was at Wednesday’s protest, told journalists that he thinks the Tbilisi mayor should make a decision that takes into account the interests of the city, and should negotiate with the investor and propose an alternative location for the hotel.

Mayor Davit Narmania, who was elected in July 2014, half a year after the Vake Park issue came up, said two weeks ago that the construction of Budapest Hotel is within the frames of red lines and is legal; however the issue is still under consideration by the court and he is awaiting a decision there.

“However our position is that there shouldn’t be a construction of such a scale there, because it may become reason to cut down even more trees,” he said.