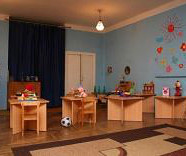 All kindergartens in the capital have suspended classes until February 1. (Interpressnews.)

TBILISI, DFWatch–468 schools are closed in Georgia on Thursday, according to the Ministry of Education.

267 schools are closed because of the swine flu outbreak and 201 are closed due to bad weather, mostly problems related to snow.

“In order to prevent the spreading of the virus, the Ministry of Education and Science continues to permanently monitor [the situation],” the ministry wrote in a statement.

“Some parents are likely not letting [their] children [go] to school as a precaution,” the ministry added.

Schools will make use of Saturdays to catch up with the lost days due to the closures.

Amiran Gamkrelidze, head of the National Center of Disease Control, said Thursday that two more people have died of the H1N1 virus in the last 24 hours. One was in Tbilisi and the other one in Adjara, in the southwest of Georgia. Six people have so far died due to the swine flu outbreak. One of them had the H1N1 (5) virus and one had H2N3 (1).

According to Gamkrelidze, the spread of the virus is no longer increasing. He believes that this may be the result of school closures and other preventive measures.

He continued saying that new figures about the virus will be known in the evening of January 29 and be published on February 1.