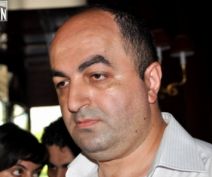 TBILISI, DFWatch–The Public Defender’s Office in Georgia calls on the Interior Ministry to react to the violation of the rights of a Georgian citizen who last month was prohibited three times from leaving Georgia.

Saikhan Muzayev complained to the office on January 20 because he was not allowed to leave Georgia and go to the UK. The Public Defender requested a legal and factual explanation from the Interior Ministry but didn’t receive any response, according to a statement issued by the ombudsman on Sunday.

Public Defender Ucha Naniashvili considers what happened a violation of the right to freely leave the country, guaranteed by the constitution.

Muzayev wasn’t given any explanation why he was prohibited from leaving the country.

“Georgia’s Public Defender calls on the Interior Ministry to act in accordance with the Georgian constitution and legislation and not allow violation of Saikhan Muzaev’s rights once again,” the ombudsman’s statement reads.

As DF Watch previously reported, Muzaev used to be Russian and Arabic translator at the Refugee Ministry. He came to Georgia from Chechnya in 2011 and was given refugee status. He received Georgian citizenship in spring 2013.