NATO will not offer Georgia a membership plan this year

NATO will not offer Georgia a membership plan this year 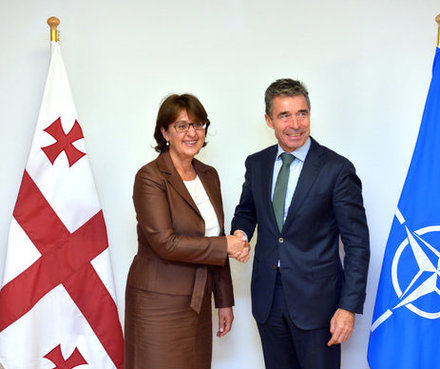 TBILISI, DFWatch–NATO will not offer Georgia a Membership Action Plan (MAP) at a summit in Wales in September, the alliance’s secretary general said on Wednesday.

“The Summit in Wales will not be about a Membership Action Plan; but about more support to bring Georgia closer to NATO. And it will be a substantive package,” Anders Fogh Rasmussen said.

NATO will work on the package with Georgia until the summit, he continued, but he did not provide more details about what this means.

Even though Georgia is not getting a MAP in September, Rasmussen he underlined that NATO stands by the decision from 2008, that Georgia will join NATO someday, but it will have to fulfill the necessary conditions.

“And the package we will prepare for the summit will bring Georgia closer to NATO,” he said during a press conference while meeting with NATO foreign ministers in Brussels.

In a question, a journalist from the TV channel Maestro claimed, as is a widely believed notion in Georgia, that NATO’s failure to offer Georgia a MAP in 2008 was what caused the war later that summer – the other theory being that it was NATO’s promise of future membership which caused the war by emboldening President Saakashvili. The journalist’s question was whether not offering a MAP this time might cause a reaction from Russia.

NATO envoy for Caucasus and Central Asia James Appathurai wrote on Facebook Thursday that he is aware that there is a disappointment among many people that a MAP will not be granted, but that Georgia is ‘actually’ moving closer to NATO, maybe not in a ‘giant step’ but at a ‘steady pace.’

“At the Summit in Wales, we will put in place an unprecedented package, connecting Georgia to NATO more deeply and more substantially than it has ever been before — and, I believe, more than any other non-NATO country,” he wrote.

Earlier in an interview with Rustavi 2, Appathurai said that what happened in 2008 was a result of the NATO’s decision in Bucharest, which was a promise of membership some time in the future. He said Russia has its own agenda and, as some of his colleagues say, regardless of whether NATO offers Georgia a MAP or not, either way Russia will respond.