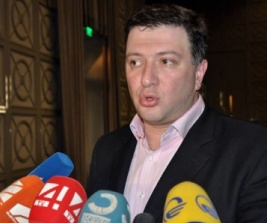 TBILISI, DFWatch–The Tbilisi mayor who was removed from office has called off his lawsuit to get back his job, calling the whole justice system ridiculous.

Gigi Ugulava, who was elected mayor of Tbilisi in 2010, at a time when most of the international community believed there was rule of law and justice in Georgia, has called off his appeal against his own suspension pending a corruption trial.

On Wednesday Ugulava held a briefing and said the situation has become ‘comical’ and it puts the government and the Prosecutor’s Office in a ‘ridiculous situation.’

He said he believes that the government is pressuring the courts and the judges.