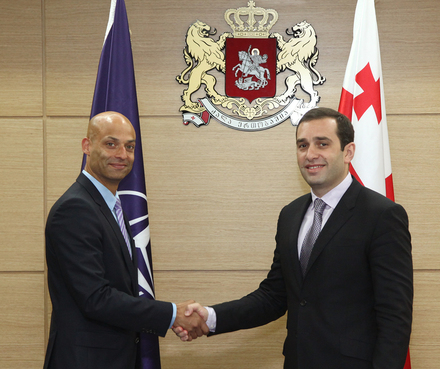 Appathurai, who is on a visit to Georgia, on Wednesday met with Defense Minister Irakli Alasania after which he answered a few questions from journalists, who inevitably wanted to know his views on the recent detention of a former mayor shortly before the local election, a period during which the government promised not to pursue such cases, a so-called moratorium.

He said the essence of NATO is that trials must be independent and free of political interference, and politically motivated legal persecution must be avoided. Appathurai said he cannot evaluate specific cases.

The goal of his visit to Georgia is to discuss preparations before the NATO summit in Wales in September and a new package which NATO is to offer Georgia. This was what he discussed with Defense Minister Alasania.

Alasania said after the meeting that the package contains several elements. First, Georgia will be better protected and safer after the summit and take more steps to bring it closer to NATO membership.

Appathurai said that the meeting with Alasania was ‘substantial and the most important’ ever held.

“Because together we were working on the details of the package that will be approved at the NATO summit and we are both determined that this package be very substantial – that it enhances the security for the Georgians and that it concretely moves Georgia towards NATO,” he said.

After that meeting, he said that they also discussed the Wales summit and it is clear that Georgia will have even deeper cooperation with NATO after the summit, which will be a continuation of the course planned during the Bucharest summit in 2008 in an ‘accelerated pace’.

“Even more Georgia to NATO and even more NATO to Georgia,” this is how Panjikidze described the package and future NATO summit expectations.

After meeting Prime Minister Irakli Gharibashvili, Appathurai said he received two messages from the PM, that Georgia will get ‘a real package’ at the Wales summit and that Georgia is ready to move closer to NATO integration as much as possible.

He also met with President Giorgi Margvelashvili, who will chair the Georgian delegation at the Wales summit. Appathurai said he is pleased that he will meet the president at the summit and expressed hope that he will bring ministers with him, as there are planned a number of meetings within the frames of the summit.

“After the discussions about the ‘package’, I’m confident NATO’s Wales Summit will agree on steps that will see a) more NATO in Georgia, probably more so than in any other non-Ally; b) more Georgia in NATO’s discussions, exercises and courses; and c) a clear confirmation that Georgia continues to move closer to NATO,” Appathurai wrote after ending his visit to Georgia.

He arrived in Tbilisi from Baku, where he met with the president and the foreign minister.

“I thanked them for what Azerbaijan contributes to NATO. And I believe that NATO and Azerbaijan can do more together, as partners, flowing from the decisions at the recent Foreign Ministers’ meeting,” he tweeted right before arriving to Tbilisi.

NATO and Georgia officially began relations when Georgia joined the North Atlantic Cooperation Council in 1992 and later in 1994 the Partnership for Peace. In 2008 at the Bucharest summit, Georgia was promised that it will become a member of NATO as soon as it fulfills the necessary requirements.

In September 2008, after the Russia-Georgia war, the NATO-Georgia Commission was established.

The first Georgian contingent left to participate in the ISAF mission in Afghanistan in 2004 with only 50 soldiers. The number of troops reached 1,600 in 2012. The country currently has 805 soldiers in Afghanistan – one of the largest non-member contributors to ISAF. 29 Georgian soldiers have died while participating in ISAF operations.

Georgia will reduce its contingent to 700 from January 1, 2015, after a decision made by the Council for State Security and Crisis Management in June.

Georgia has also committed to participate in the post-ISAF mission after 2014.

In addition to those engagements, Georgia has also participated in exercises organized by NATO, notably one exercise in Bulgaria this spring, and is to contribute soldiers to the NATO Reaction Force in 2015, as previously reported by DF Watch.