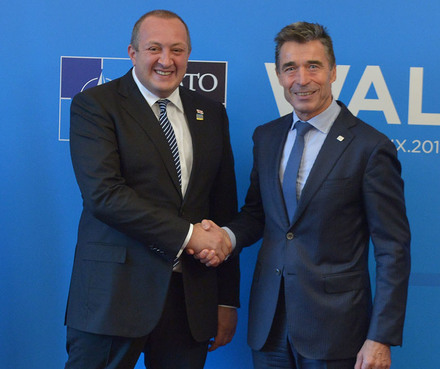 The two talked about the importance of the summit on the background of the Ukraine crisis and the significance of strengthening security in the region.

Margvelashvili thanked Rasmussen for supporting Georgia in its aspirations for NATO integration and expressed hope that the upcoming summit will give a push Georgia toward joining NATO. The president also expressed hope that the final result of the summit will increase Georgia’s security and defense ability, according to the president’s press office.

Rasmussen said that the summit will be an important impetus to prepare the country for NATO integration and manage processes better.

The meeting was attended by the foreign minister, defense minister, secretary of the Security Council and the minister for Euro and Euro-Atlantic integration.

At the beginning of the meeting, Rasmussen congratulated Margvelashvili on his 45th birthday.

He also wrote that as one of the largest non-NATO troop contributors to ISAF in Afghanistan, Georgia showed itself as a security exporter.

The president also wrote on Twitter that he thanked Rasmussen for supporting Georgia on the way of NATO integration.