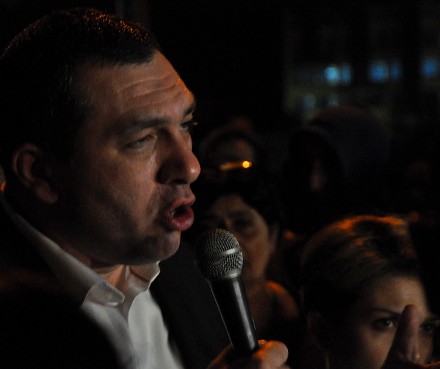 TBILISI, DFWatch–Former first lady Sandra Roelofs, who is running for parliament representing her husband’s party in western Georgia, has disputed the preliminary results which show that she did not win an outright victory.

After 82 percent of votes had been counted, Roelofs had 46.22 percent of the votes, while Edisher Toloraia, her competitor from Georgian Dream, had 46.94 percent in the race for majoritarian MP from Zugdidi, according to the most recent results published by the Central Election Commission (CEC).

Since none of the two top candidates were able to surpass the 50 percent threshold, a second round will be held where the two will face each other.

Roelofs says the battle is not over and that UNM has acquired first hand results since 20:00 and they were handily winning in every district.

She claims there were violations, like damaged ballot boxes, members of CEC who went missing and that many bulletins which were marked UNM were discarded.

Members and backers of National Movement demonstrated in front of the CEC building to contest the results, claiming that they body published exact results predicted by the exit polls of Imedi TV.

The protest began at 03:00am and lasted several hours.

Sunday, UNM’s former candidate for Tbilisi mayor Nika Melia warned that the party will present an action plan later today, after their members have arrived from the regions so they can make a joint decision.

UNM will get 26.46 percent of votes in the proportionate system, while Georgian Dream is expected to get 49.26 percent.