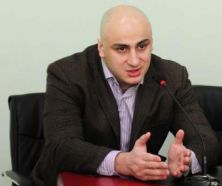 Nika Melia, a relatively unknown former official in the capital, was directly appointed, as the party chose not to conducted a primary.

Giorgi Vashadze, former Foreign Minister and member of the UNM, on Wednesday withdrew his candidacy from the primary election in favor of Melia, and the primary was canceled.

Nika, or Nikoloz, Melia served for some time as governor of the old district of Tbilisi last year. He has been implicated in the investigation into a scheme to run an opposition-linked bank bankrupt while the National Movement was in power.

Melia also was involved in a late night brawl at a Tbilisi restaurant May 11, 2013, where former President Saakashvili was one of the guests. Melia was charged with hooliganism.

UNM selected a candidate for the presidential election in October 2013 through primaries among party members in every region of the country. UNM members said at the time that they wanted to select their candidates through primaries because it displayed their party’s high level of democracy and this way they set a good example for the country.

UNM members said they were planning to select a candidate for Tbilisi mayor the same way. The mayor of Tbilisi was the only mayor elected in the local election in 2010. The new government amended the legislation so mayors now will be elected in 12 cities, and gamgebelis, local heads of municipalities, will be elected in 66 places.

Wednesday, Vashadze, who first said last year that he was planning to run as a mayoral candidate in the local elections, said that he decided to withdraw his candidacy. He didn’t say the reason but only specified that he did it in favor of Melia’s candidacy.

“Internal competition brought new people, new leaders, and Nika Melia among them,” he said, adding that Melia is his good friend. “This is really positive. That’s why I made this decision to withdraw my candidacy in his favor, and the most important thing is that we start a new phase of changes.”

Vashadze would have had to leave his post as member of parliament in order to take part in the local elections, because legislation prohibits an MPs from participating in elections. If he had lost, he would not have been able to go back to being an MP.

Georgian Dream, the ruling coalition and majority in parliament, a few months ago named Davit Narmania as its candidate for Tbilis mayor. He is Minister of Regional Development and Infrastructure.