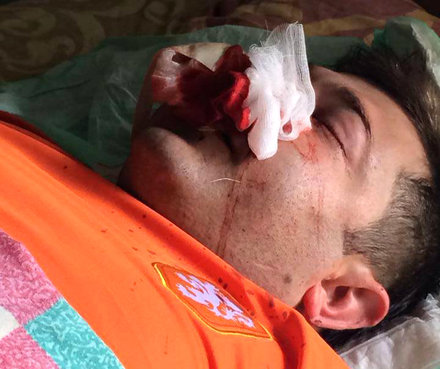 Levan Tetemadze was taken to the hospital and treated for head injuries and broken facial bones. (Photo published on Facebook by the National Movement in Batumi.)

TBILISI, DFWatch–A member of the National Movement was Saturday attacked in Batumi, a city on the Black Sea coast.

Party activist Levan Tetemadze was beaten outside his house on Vazha-Pshavela street, according to Giorgi Kirtadze, head of the UNM in Adjara.

He says some people called on Tetemadze and asked him to come down to the yard, and when he complied, he was hit on head with a sharp object.

There were many witnesses to the attack, Kirtadze says, and the police should identify the attackers. Witnesses say there were three attackers.

The victim was taken to Batumi Republican Hospital to receive treatment for head injuries and broken facial bones.

The Ministry of Internal Affairs has launched an investigation based on article 125 of the criminal code about violent assault.