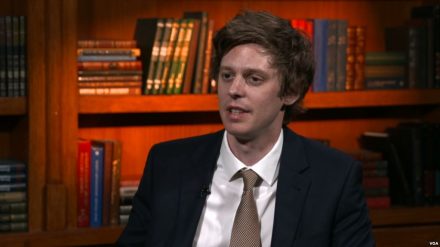 Russian Kleptocracy has become such a big issue because they pushed it so hard, Vladimir Putin and group of his friends symbolize nothing more than an organized crime, we are seeing tentacles of the Kremlin growing outward from Russia, says Nate Sibley, Program Manager at Hudson Institute’s Kleptocracy Initiative, Washington D.C. VOA’s Nana Sajaia talked to Nate Sibley on how Russian kleptocracy threatens the world utilizing weaknesses and loopholes in Western democracies.

VoA: If you have to describe a kleptocrat, who is the person?

Nate Sibley: [Kleptocrat] would be a person within significant political influence, not necessarily on very top political level, but we are certainly not talking about the lowest level either. We are not interested in a corrupt Russian policeman, for example, who takes bribes to get people out of traffic tickets.

We are talking about a high-level people, they are not necessarily politicians, they might be influential businessmen, oligarchs, senior judges – they are people who use corrupt way of governing, they occupy positions of influence within it and they corrupt system.

When we talk about kleptocrats or Kleptocracy, we talk about grand corruption, where system of government basically relies on corruption to keep going. The meaning changed a bit, whereas they used to keep money in the country, we are talking now about a global system.

VoA: In your research you focus on Russian Kleptocracy, what is specific about it? How does it work?

Nate Sibley: Russia always had problems with corruption but since the Cold War ended and the Berlin wall came down Russia became integrated with the global economic systems. Simultaneously Vladimir Putin and group of his friends managed to seize the power. They symbolize nothing more than an organized crime. We are seeing tentacles of the Kremlin growing outward from Russia.

And now you can find examples of Russian corruption not just in Russia but in every country on the earth. If you go to the Balkans, you’ll find lots of Russian money swirling around the electoral process; if you go to central London, you’ll find a lot of houses owned by corrupt money; if you come here to the US you find Russian money being used to try to influence American voters. Russian Kleptocracy has become such a big issue because they pushed it so hard.

VoA:  In your recent report you say that Kleptocratic regimes use corruption as a means of a control inside and a weapon of influence abroad, what kind of influence are we looking at?

Nate Sibley: We look at specific examples. We know they tried to interfere the presidential elections in 2016, we know they have given money directly to political campaigns, they financed misleading fake news and misleading website designed to confuse readers.

VoA:  Your report states Kleptocracy shall not be measured only by already achieved objectives. How shall we measure it?

Nate Sibley: The success of Russian Kleptocracy depends on us, on our weaknesses and loopholes. What we should be measuring now is our vulnerability, because Kleptocracy’s margin of success is precisely as wide as our margin of vulnerability.

We have loopholes in our campaign financing, in the United States, nobody in the government knows who the owners of the companies are. Because they do not need to register, actual owners. It is a huge loophole. It is also very easy to launder money in the US. That’s what we are talking about.

VoA:  Why it is so important to end anonymous ownership of companies?

Nate Sibley: It’s not a penicillin, but the fact that it has not happened. It needs to be the first step to stimulate anything else work. Forget about further steps unless ending anonymous companies.

An anonymous company is not sinister as it sounds, it is simply a company registered in any jurisdiction, which does not require a person registering it to disclose who all the owners are.

If you take one thing from the report, it’s ending financial secrecy we have here in the West.

VoA:  You also discuss comprehensive enforcement of FARA – The Foreign Agents Registration Act, what are you calling for?

Nate Sibley: FARA was brought in 1930s to counter people handing Nazi pamphlets. We now live in a globalized, digitized age, and it’s just not up to date.

We shall start from scratch with stakeholders, lobby communities, NGOs and the Department of Justice to create a new up-to-date system for registering people who are representing foreign governments and foreign companies.

Foreign influence tracker for the 21st century – that’s what we are asking for.

VoA:  One of the eight recommendations you made to current administration is developing a counter-Kleptocracy Doctrine. What would you like to be in the doctrine?

Nate Sibley: That would really be setting the tone for the rest of the US government to follow. We have a national security strategy that correctly identifies that the adversarial powers like Russia and China use corruption as a means of influence.

What we would like is a sub-strategy setting out the nature of the problem, recognizing that it is absolutely a major strategic security challenge that the US is facing.

VoA: Do you find it realistic?

Nate Sibley: Nothing there is unrealistic, but we do not expect a lot to happen tomorrow. For example, with everything going on in domestic politics, I do not expect that Trump White House will bring out counter-kleptocracy strategy tomorrow.