Muslims in Batumi hoping for permission to build new mosque

Muslims in Batumi hoping for permission to build new mosque 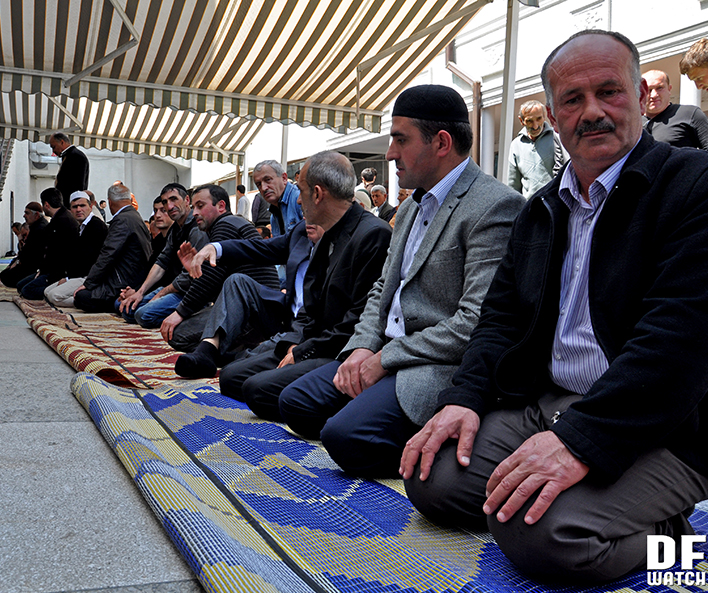 At Friday prayer, the street outside is used for additional prayer space. (DF Watch.)

TBILISI, DFWatch–For more than a decade, Muslims in Batumi have failed to get permission to build a second mosque in the city. The one they have is not big enough to meet demand.

Every Friday, several thousands of Muslims come to Orta Jame Mosque in Batumi, a city on the Black Sea in the far south east of Georgia. Half of them have to place their rugs outside in the yard or even in the street, because there isn’t room for them inside.

The Muslim community is putting up the money for a new mosque themselves, but there are no signs yet that the project will get a green light. 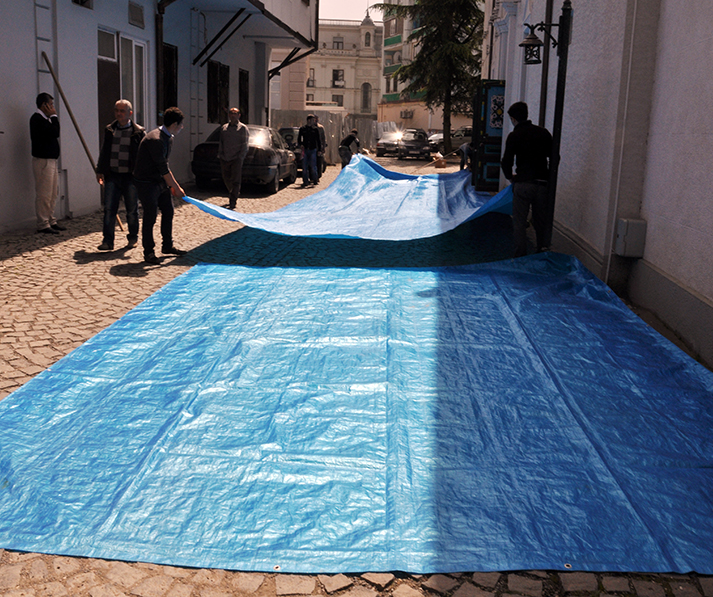 The street is covered with tarpaulin for people to place their mats on. (DF Watch.)

DF Watch went to Batumi to witness how a Friday prayer goes on in the only mosque in the city. Prayer starts at exactly 13:20, but before that there are lines at the washing place as everyone must wash before praying. One by one, people start sitting down in the yard, filling every spot available.

Those inside the mosque are squeezed together, on both floors.

Then some youngsters bring a large blue tarpaulin canvas and put it in the street. Soon the narrow street is filled with people who are there to pray. Passers-by have to find a way around. 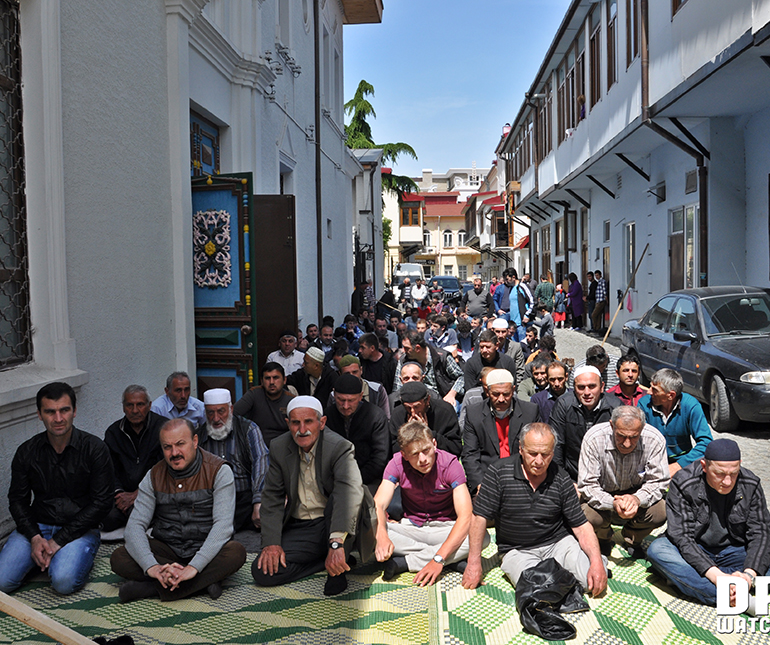 The Muslims say even more people come to pray on special holidays and they have to park their cars kilometers away as there is no place near the mosque.

We spoke with Tariel Nakaidze, Chairman of Georgia’s Muslim Union, who was present at Friday prayer. He says that Orta Jame is a historical monument and it is not right to demolish or expand it, and besides, there is no space available to expand it. In fact, the streets on both sides of the mosque are quite narrow and filled with shops and different public places.

“Nither this nor the previous government thought of constructing a new mosque,” he says. “They lie to us, Muslims, about wanting to construct a mosque.”

He continues saying that Muslims don’t want financing, only permission.

The goal now, he adds, is to raise awareness among people of the need for a new mosque in Adjara, a region in the south west of Georgia which according to official figures has four hundred thousand people, half of them in Batumi, although official population figures are unreliable and the real number probably is much lower.

“Georgia cannot play it is a democracy. Either it is democratic or it is theocratic,” he continues. “If it wants to be democratic, then there must be built mosques and churches and any other places of worship.”

Nakaidze says in Soviet times it was prohibited to pray, but Muslims always found ways to pray and if the government doesn’t want them to pray they must let Muslims know and they will find a way to pray.

“If you go all over Batumi there are about 19 churches. No Muslim ever protested. If there is such a need, it must be allowed, but they shouldn’t prohibit Muslims from praying too. This would be democracy.”

Following an agreement between Georgia and Turkey to maintain Georgian cultural heritage in Turkey and construct a new mosque in Georgia, Orthodox Christians reacted against it, first of all because there were claims that Turkey wants to restore the former Aziz Mosque in Batumi, named after a Turkish leader. They thought this was insulting to their belief and the history of Georgia.

Nakaidze calls this portrayal of the agreement manipulation.

“As if Turkey is breaking in and they want to construct a mosque here,” he says. “Then we must block the border with Turkey.” 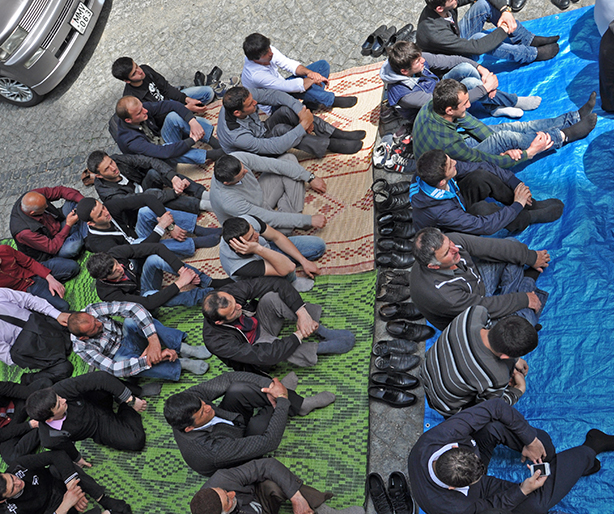 He and other Muslims point out that only a few of the Turks living in Batumi come to the mosque to pray. Most of those who come to Orta Jame Mosque are Georgians, and Georgian Muslims are the ones who want a new mosque, not Turks. According to him, about 60 percent of the population of Batumi are Muslims.

Zurab Jimsheradz, a Muslim from Batumi, says their religion prescribes they have to come for prayer early and wash, get cleaned, take off their shoes and then pray, fully prepared. But here, when it rains or there is snow, a washed-up Muslim puts his rug in the mud and sometimes during prayer, the Mufti tells the prayers outside that he allows them not to put their heads on the ground as normally required, because they will have to put their heads in the mud and snow.

Nazim Akhmed, who comes to pray at Batumi mosque, says that they want help from the government.

“People pray in the street. This is not right.”

Tariel Nakaidze says even if there was enough place in Orta Jame, what if people would like to pray in another mosque? Why should that be a crime?

“I am almost ashamed of claiming that there are many people here and we want a new mosque. What if I want another mosque, what kind of law prohibits me from constructing a new mosque?” he asks.

“We will finance it. We don’t want financing from the government or from Turkey. We, the people, will build it. Just give us permission.”

But Nakaidze says it also shouldn’t be a problem if Turkey wants to finance it.

“If Turkey finances the Georgian army or Ministry of Education, it will finance a mosque too. We can receive help from any country. Why should it be restricted?”

When we ask where they want a new mosque, they agree to construct a mosque anywhere in the city where City Hall allows them too, where it will be possible for them to go without any problems.

A few weeks ago, Archil Khabadze, head of the Autonomous Republic of Adjara, said that the local government has decided to expand Orta Jame mosque.